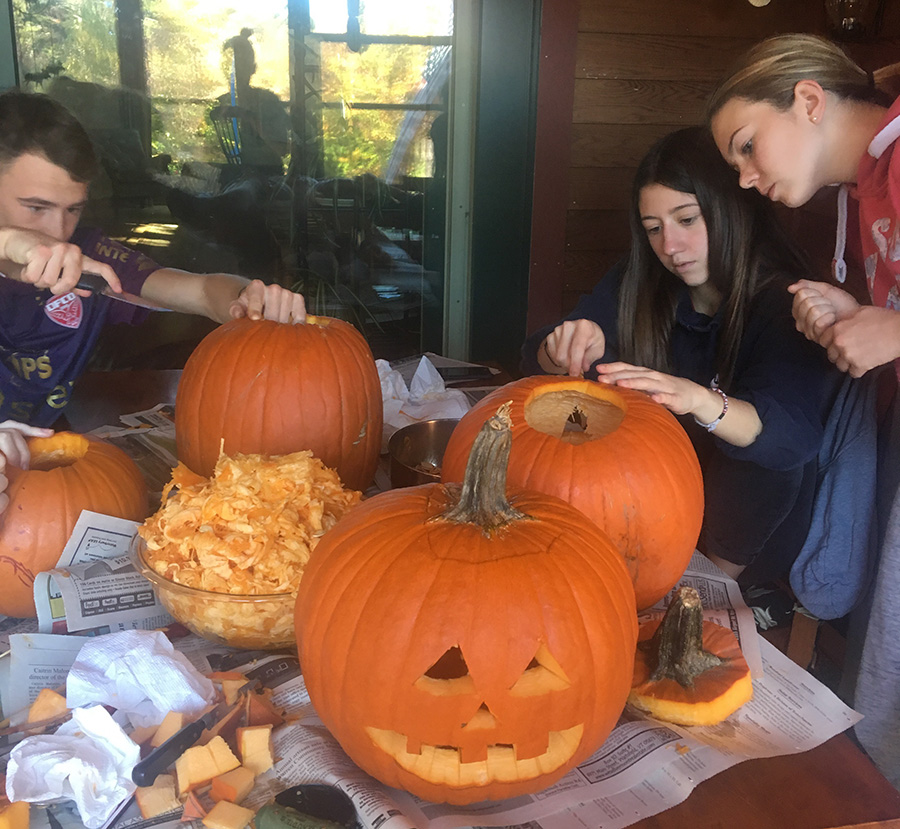 One year ago, Harwood French students began writing their first letters to pen pals over 3,000 miles away; last week, those pen pals arrived in The Valley.

Harwood’s French pen pal tradition started over 10 years ago, when a local student went on exchange in Langres, France. Ever since, building this pen pal relationship throughout the school year has been an integral part in Harwood’s high school–level French classes.

After a few years of exchanging letters, a group from the Diderot School in Langres decided to travel to Vermont to meet their pen pals in person.

Their 2016 October trip was a huge success, and the following spring a group of Harwood students traveled back to Langres to experience the culture of the people they corresponded with.

Early this year, Harwood students and teachers planned for the arrival of the latest group from France.

In the early morning hours of Friday, October 12, 49 students and five teachers from the Diderot School arrived at the Burlington airport. They were taken by bus to Harwood, where 25 host families waited to pick them up.

The Harwood French team organized plenty of activities and tours throughout the week. Saturday morning, after settling in, the students visited Montpelier, where local students led a tour of the State House entirely in French.

After they had explored the capital, the group moved on to Morse Farm, where the visiting students were able to experience a unique aspect of Vermont. They enjoyed exploring the farm and stopping by the gift shop and they especially loved tasting their first maple creemees.

“The students are from a city, so they don’t get to experience the outdoors as much. They really enjoyed tasting the maple syrup and creemees. We also went for a walk in the woods at Morse Farm and the foliage was at its peak, so they got to see Vermont at one of its most beautiful times,” said Harwood student Anna Jamieson, who was also a host for the visitors.

Students were able to relax with their host families on Sunday and settle into their temporary homes before visiting Harwood itself the next day. During their free time, some families took their students shopping and hiking and introduced their guests to the tradition of pumpkin carving, an activity that was very new to the French students.

After getting familiar with host families, the foreign students experienced a day in the life of their American pen pals. They began their morning at Harwood with a special brunch in the cafeteria, followed by a guided tour of the school led by French IV and AP French students.

For the weeks leading up to the visit, Harwood students had been working on creating scripts for a tour entirely in French, pointing out important areas around the building and explaining their significance.

The French students spent the rest of their day following their host students’ schedules, visiting math, science, humanities, band, art and even aerospace classes. “I think they really enjoyed coming into our classes. They were definitely surprised that we do more hands-on work instead of long lectures, which is what they are used to in France,” said student Avery Murphy.

When Monday’s final bell had rung, the group was off to Ben and Jerry’s for a factory tour. They enjoyed watching their favorite flavors being made, and were sure to take plenty of photos under the famous sign.

On their final full day in Vermont, the students took a hike up to Libby’s Lookout in Bolton, followed by a shopping trip to Church Street, Burlington. The students loved looking around small Vermont boutiques and especially enjoyed taking photos with their new friends under the vibrant foliage.

Over only a four-day period, students formed friendships with peers from across the globe and got a peek into what life is like for kids their age in a different culture.“You don’t realize how much you have touched their lives until they are ready to leave. Even the students who were shy at the beginning of the trip were crying by the last day. We became so close in such a short time,” Murphy said.