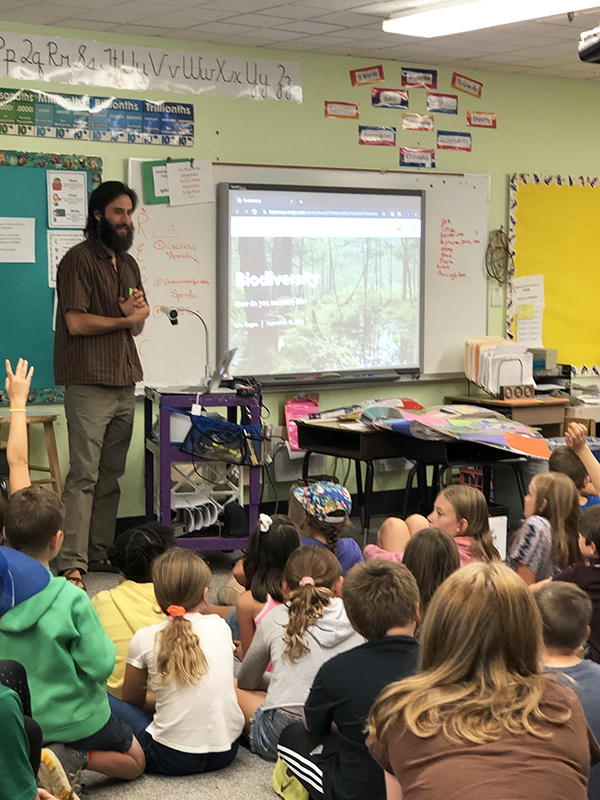 First- through sixth-grade students at Warren Elementary School, plus teachers and community volunteers are conducting a bioblitz at and around the school today, Spetember 19.

The Warren Elementary School bioblitz is one of 10 taking place in Central Vermont during the first two weeks of September. The goal is for students to look for and count as many species as they can on school property or close by. Students, staff and volunteers will take pictures of what they find and upload them to www.iNaturalist.org where naturalists nationally can upload and identify flora and fauna. They will also use the iNaturalist app.

Warren Elementary third/fourth-grade teacher Katie Sullivan organized this week’s event and had originally planned to work with only the school’s two third/fourth-grade classes, but then found out that other teachers were excited about having their students participate as well.

“A bioblitz is a one-shot-in-time picture. It’s not going to be a thing that we’d do every week. We’re going to have small groups of kids go out into the field with biologists and other volunteers. We’ve borrowed some cool collection kits from the North Branch Nature Center that have nets, bug boxes, vials and other collecting equipment,” Sullivan said.

She attended two trainings at North Branch Nature Center on collection methods and preparation such as putting a makeshift log out in the grass earlier in the day and turning it over to find critters once the bioblitz starts.

After the collection, they’ll use the identification books in the collection kits and will also be uploading pics taken with school iPads and volunteers’ phones with the iNaturalist app.

“That’s the beauty of iNaturalist app.You take a picture and all the field biologists weigh in,” Sullivan said.

For this first bioblizt, participants will head out to the field behind the kiosk where 10 to 15 kids and one adult will search for plants, insects, mammals, reptiles to collect, record on paper or take a pic on the iNaturalist app on devices. That work will take place from 1 to 2 p.m. Sullivan hopes to hold another bioblitz in the spring.

In preparation for the event, Sullivan invited Eric Hagen, a UVM grad student and consultant with the Vermont Alliance for Half Earth, who spoke to Warren third- through sixth-graders about biodiversity and the Half Earth Project on Tuesday, September 17.

She said that she and other teachers could use the bioblitz in tandem with existing science currilum about biodiversity. A bioblitz is a short activity that doesn’t address any particular science standard but can be a good jumping-off point for units on life cycles, adaptions and biological evolution, she explained.