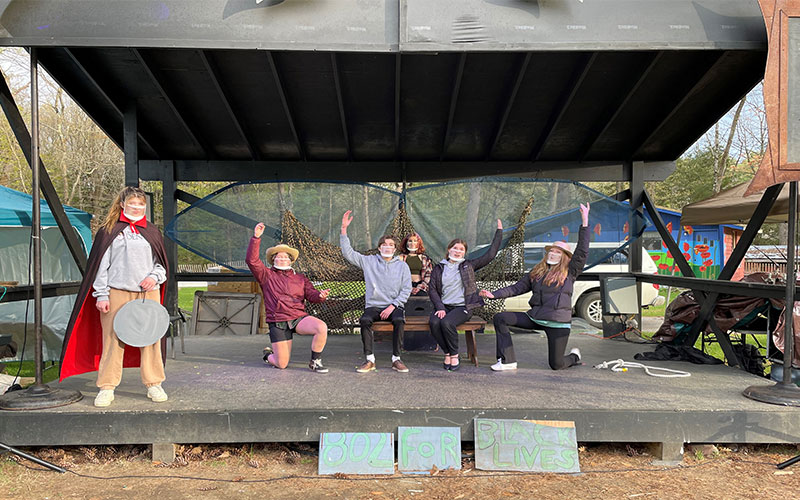 Harwood Union High School is presenting "The Fantasticks" with book/lyrics by Tom Jones and music by Harvey Schmidt. The world's longest-running musical, "The Fantasticks" originally premiered Off-Broadway in 1960 and tells the story of two neighboring families who trick their children into falling in love by pretending to feud. Though there are some melancholy themes, there is also plenty of comedy throughout such as in "This Plum is Too Ripe" where many will empathize with a family getting irritated with one another after spending a little too much time together or perhaps the parents who believe it is easier to "Plant a Radish" than to raise a child.

Harwood's production will be based upon the updated 2006 revival and features eight students in grades eight through 11. Wanda Sullivan and Christopher Cummiskey are Luisa and Matt with Abby Holter as El Gallo, Claudia Derryberry and Abigail Leighty are the parents, with Mia Lapointe and Sadie McKibben as the actors Henry and Mortimer and Zoe Blackman as The Mute.

In order to safely welcome a live audience back to the Harwood musical, the performances will be held outdoors at Camp Meade in Middlesex. Three performances will run Thursday through Saturday, May 13-15, at 7:30 p.m. Attendees are encouraged to bring lawn chairs and blankets though there will be some available on site. All attendees must be masked and distance must be maintained between family groups. Spectators may not attend the performance if they feel unwell (have any symptoms of COVID-19) or have been directed to quarantine by the Vermont Department of Health.

Tickets are by a suggested donation. Cash or check accepted at the door. The creative team, director Scott Weigand and music director Stefanie Weigand, are excited for the community to be gathered together for live theater again and to hear laughter, sighs, cheers and the applause these students so deserve.