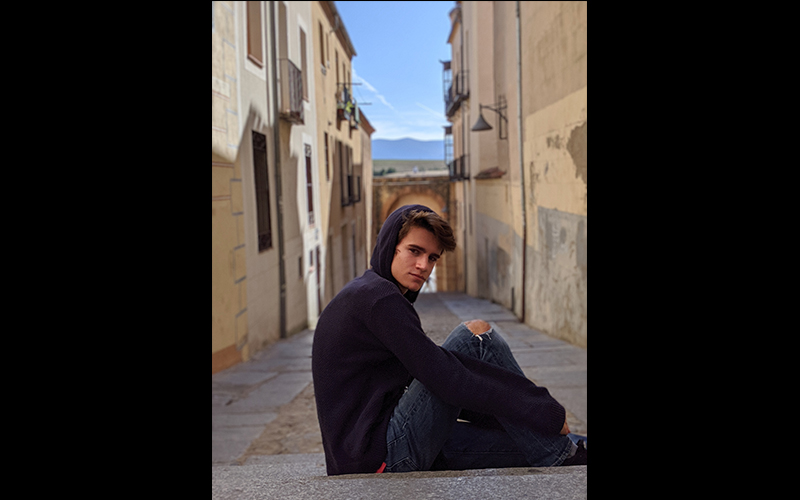 Ben Nardin, Waitsfield, spent his senior year at Harwood Union High School exploring different forms of writing, including journalism with The Valley Reporter and poetry with the Vermont Poetry Society’s journal “The Mountain Troubadour.” Nardin has written for The Valley Reporter since last fall and graduates from Harwood this weekend, though he had enough credits to finish his classes earlier this spring. Since then, he’s been working at Ben and Jerry’s in Waterbury and preparing to study abroad.

He will study creative writing and English literature at University College Dublin in Ireland. He’s been to Dublin, first in 2018 while visiting family in Italy, then again, this past April to visit the school.

“It’s been a really interesting year,” Nardin said. Knowing his passion for writing, Harwood internship coordinator Rachael Potts helped him find the two internships to explore different styles of writing. Nardin said, while it was a lot to juggle his senior year, it was “a very rewarding experience.

“This time has been really good for me to get out of my shell,” he said, after moving to Vermont during a pandemic his sophomore year. “The biggest part is how my writing affects other people. Up until the internship all my writing had been private, safe. This was a really good chance for me to have an audience. It was really the journalistic side of writing that I needed to hone, to know this is going to be read by a lot of people.” He had also written a lot of poems during the pandemic and revisited some that he edited and had published in “The Mountain Troubadour’s” 75th issue this spring.

He said the highlight of his time at The Valley Reporter has been getting to talk to lots of different people. “I was always a little anxious about calling people,” he said, realizing that the person on the other end of the phone was just “another human being.”

“One of the most incredible experiences was when I interviewed Ted Joslin” for The Valley Reporter’s annual Veterans Day issue last fall. “To hear his experiences from him and then to transcribe them, there are no words. I’ve really enjoyed the times I’ve been able to tell someone’s story.” He spoke to voters exiting the polls last November and talked to Harwood students about what it was like going into the third year impacted by the pandemic. He wrote about climate change and local politics. Nardin said he’s compiled a binder filled with the newspaper clippings of all of his articles in The Valley Reporter.

After studying writing in Dublin, he hopes to make a career out of some form of writing, whether it’s journalism, screenplays, novels or something else. “As long as I’m writing,” he said, adding, “My biggest dream is to write a book and publish it.”

He encourages other students to try out internships. “Put your dreams into action,” he said. “You can’t wait around for things to happen to you.”