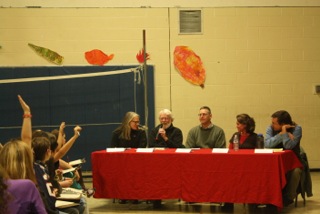 On Friday, November 9, students at Warren Elementary School had a chance to influence an important upcoming town decision when, in a civic engagement project organized by third and fourth grade teacher Katie Sullivan, the school hosted a public forum about the future of Eaton Forest.

Recently, the Warren Conservation Commission came before the Warren Select Board with a proposal to turn Eaton Forest, a 114-acre parcel of land directly north of the school, over to the Vermont Land Trust. The Land Trust would put a conservation easement on the parcel, which would permanently protect it from development. Currently, the parcel is owned by the town and any decisions made regarding it must be approved by the select board or via town vote.

The town planning commission weighed in, proposing that the property remain in conservation, but with the town rather than the Vermont Land Trust.

At the forum, which took place in the Warren Elementary School gymnasium, students in grades three through six took turns asking questions about Eaton Forest before a panel of elected town officials. While many of their questions (“What will happen to all of the animals on the land?”) elicited smiles, they also demanded careful, thoughtful responses. What would happen to all of the animals if the town ever chose to develop the land?

The panel consisted of select board chair Andy Cunningham and select board member Kirsten Reilly. Warren Planning Commission member Dan Raddock also sat on the panel, as well as conservation commission members Damon Reed and Margot Wade. Valley Reporter editor Lisa Loomis moderated the debate, but, for the most part, her job consisted on calling on the sea of students in the audience whose hands stretched eagerly towards the ceiling each time she called for another question.

At the start of the forum, Sullivan encouraged students to take careful notes while listening to the panelists’ responses. Over the past few weeks, Sullivan and her class have familiarized themselves with some of the issues surrounding the management of Eaton Forest, and last Friday’s forum, Sullivan explained, was for gathering details, facts and examples that students will incorporate into an upcoming position paper Sullivan is calling “Take a Stand, On the Land.” In the paper, students will answer the question “What do you think the town of Warren should do with the Eaton Forest?”

A brief history and geography lesson

The town purchased the Eaton Forest back in 1983 to stop a condominium complex from being built on the land. About 10 to 14 years ago, when Warren considered the land as a site for its own affordable housing complex, the proposal was rejected in a townwide vote. Since then, the select board has chosen not to develop the land, save creating a couple of miles of trails open to students and to the public.

Physically, the land included in the Eaton Forest parcel is steep, wet and wooded. “It’s not ideal for development,” Reed said, but that doesn’t make building there impossible. “Where there’s a will, there’s a way,” he said.

Right now, the select board is being asked “to make a decision for this land that could be for all time,” Cunningham said in an opening statement, explaining why he’s hesitant to accept the Vermont Land Trust’s permanent conservation easement.

In terms of town need, “We don’t know what the future is going hold,” Reilly said in agreement, and she gave an example from earlier this year, when the select board found a perfect site for the new town garage, but there was an easement on the property that eliminated it as an option.

Since much of Warren’s forested areas are either federally or privately owned, if the town put an easement on Eaton Forest—one of only a few town-owned parcels—“it would be giving up an asset,” select board member Bob Ackland said in a select board meeting that took place earlier this fall.

“I think that the town is pretty good at managing its land, from a conservation standpoint,” Ackland said, explaining that if Warren votes against the conservation easement, conservation can continue at a local—rather than statewide—level. But it doesn’t guarantee that it always will.

Eaton Forest “is town land, and townspeople should be the ones who make decisions about the land—now, and in the future,” Raddock said on behalf of the planning commission, which helps to inform the select board on issues but does not ultimately make the decisions.

The problem in rejecting the conservation easement, however, is that “a management plan is only as good as the people running the town,” Reed said. The conservation commission is “the voice of the land,” he said, and while he applauds the conservation efforts of the current select board, he worries that future boards will not always keep conservation in mind.

“We’re all volunteers,” Wade said of those who serve on the select board, the planning commission and the conservation commission. She recommends turning Eaton Forest over to the Land Trust, which she feels can expend more time, energy and money towards protecting it. “That’s what they do,” Wade said. “That’s their job.”

Due to Eaton Forest’s proximity to Warren Elementary School, the students “have a connection with it,” Sullivan said, or at least with the trail that traverses the edge of the parcel. So naturally, it made sense that many students’ questions concerned the fate of their trail.

If the town rejected the conservation easement, “I would always keep the trail,” Cunningham assured. “There’s no discussion about taking it away.”

But, if the town did decide to develop land adjacent to the trail, any construction could negatively affect the wildlife in the area. Breaking up forests disrupts natural habitats, Reed explained, and it’s “a legitimate concern,” he said when asked about the fate of the animals.

“What are some other things the land could be used for,” one student asked, if the conservation easement were not put in place? And the ideas the select board suggested were relatively harmless.

The town could use the area to build more trails, or maybe even develop a tree tapping operation, Cunningham and Reilly suggested. The town could also use the parcel as a bargaining tool, as they could trade it for another piece of land that they needed, Reilly said.

The next phase of the project

On the papers students used to take notes during the forum, Sullivan included a line at the bottom that read “One fact or detail I think is important or interesting is…”

Flipping through students’ responses, one third-grader wrote: “They do like the trail, and probably will not want to make buildings or houses there.”

Having gathered all of the facts, the students are now starting to formulate the opinions that will guide their position papers. Each student has to write one, Sullivan explained, but it’s up to them what they want to do with the essays once they’re finished.

“We’ll have a brainstorming session,” Sullivan explained, in which students will consider all of the different ways they can have their voices heard. “They could submit their essays to the paper, they could make them into a video for Channel 44, they could do an interview on WMRW,” Sullivan said. “They could actually speak at a meeting, if that were an option.”

Right now, the possibilities are many for the students at Warren Elementary School, as they work hard to help Warren make a decision about Eaton Forest that will be best for the town—and the animals.