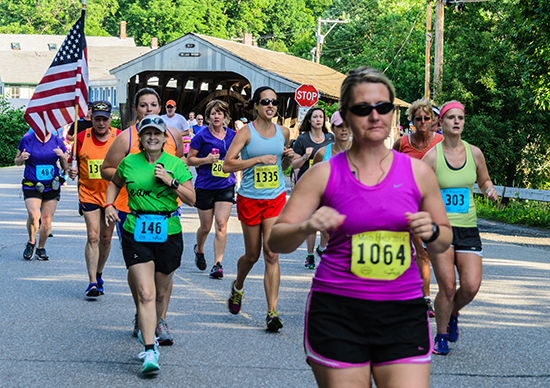 This year's Mad Marathon saw sunny skies, not-too-hot temperatures and some surprising finishes. Over 500 runners and almost as many walkers participated in the fourth-annual race, which took place Sunday, July 6.

In the marathon, a relatively new runner, 25-year-old Erik Hinrichsen of Boston, beat out 43-year-old Chuck Engle of Arlington, Virginia, who has competed in over 300 marathons. After a hilly 26.2 miles through The Valley, Hinrichsen crossed the finish line first with a time of 2:44:50—a new course record—and Engle finished second in 2:48:18. Brad Poppele of Colorado Springs, Colorado, came in third with a time of 2:53:01.

In the half marathon, a woman posted the top time this year. Thirty-year-old Rachel Clattenburg of Washington, DC, beat out her male competitors to cross the finish line first with a time of 1:31:49. Philip McCormack of Nashua, New Hampshire, finished second in 1:32:11 and David Gallagher of Marlborough, Massachusetts, finished third with a time of 1:35:04.

Several local runners did well in both races, most likely benefiting from having no option but to train on The Valley's mountainous terrain.

In the three-person marathon relay, The Valley team, "Lil C'Czars," which consisted of Geoffrey Kazlow, Nathan Kazlow and Caleb Kessler came in first place with a time of 2:45:23. In the five-person marathon relay, another group of locals came in first place, as Rob Williams, Anneka Williams, Kate Williams, Larson Gunness and Jamie Gunness of team "Go Fro Pro" finished with a time of 3:13:02.

This year, Mad Marathon organizers were excited that chief running officer of Runners' World Magazine Bart Yasso came to run in the race, as it will continue to grow with increased out-of-state publicity as well as with increased support from local competitors and volunteers.