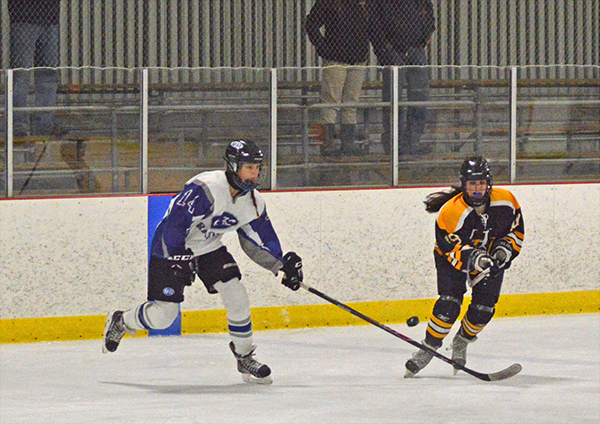 Harwood Union girls’ hockey kicked off their season with one win and one loss this weekend.

On Saturday, December 3, the Harwood Highlanders took on U-32 at the Central Vermont Civic Center, and although they had a few early breakaways they were not able to find the back of the net. U-32, however, made use of almost all their scoring chances and went on to defeat the Highlanders 9-3.

U-32’s Michaela Bernier ended the first quarter by beating the only defender in front of her, crossing in front of the net and putting the puck into the top right corner of the net. She also opened the third quarter with an almost identical goal. Bernier would finish the night with five goals and an assist.

Harwood also had trouble getting around U-32’s defense, especially Bella Parento, who used her speed to not only stop goals but score one of her own.

Harwood’s Cecilia Lawton was able to put the Highlanders on the board late into the second period with a power play goal. The Highlanders would go on to build on that performance and score two more goals in the third period.

Just the previous night the offense was clicking in a different way, when they defeated Lyndon Institute 7-0, but that was a different type of team, according to Harwood head coach Mike Vasseur.

“North Country Union/Lyndon Institute had a lot of new players; we were able to play everyone on the team and it was a good starter game for us,” Vasseur said of the team's first performance the previous night at the same rink.

Vasseur did not think that his team's performance was any different between the two nights, but U-32 brought a level of competition on Saturday that the Highlanders did not see on Friday.