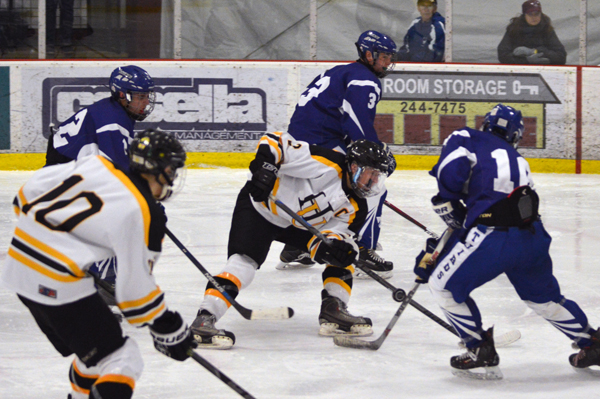 Harwood boys’ hockey defeated Missisquoi Valley Union 8-5 on Saturday, January 7, showing once again that no matter how many goals their opponent scores, they will score more.

The first period ended with three penalties and six goals combined as if each team wanted to show everyone what type of game it was going to be. Missisquoi opened the scoring immediately, just 36 seconds into the game. Their lead did not last very long though as Harwood countered with four unanswered goals.

Junior forward Erik Ziedens scored first for the Highlanders to tie the game up 2:10 into the first period. Captain and senior Eli Rivers then scored two goals in three minutes to give Harwood the lead 3-1, and they would not give it away for the rest of the night. Hunter Wimble would score once more for the Highlanders and Missisquoi would add one to their tally, and Harwood headed into the first intermission up 4-2.

Conner Cameron, Justin Cantwell and Ryan Garrand also scored for Harwood on their way to victory and Eli Rivers put in one more in the third period to complete his hat trick.

One name that unbelievably does not show up on the score sheet is Harwood’s captain, Sam Towne. Towne is arguably the most recognizable skater in any game, albeit for long blond hair that waves behind him as he skates around the ice, but once he has people’s attention Towne shows exactly why he was given the C on his sweater at the beginning of the season.

He may not score goals and he admittedly takes more penalties than he would like, but he works harder than anyone every shift to give the rest of his team every opportunity they need, which is why he was awarded Harwood’s second star of Saturday’s game.

“I just try to skate hard every game. I’m not too good with the stick or anything like Rivers is; he gets goals, that’s his job and I just try to get out and skate hard. There’s a lot of kids that have different roles on the team and that’s mine,” Towne said. He doesn’t care about the individual points; everyone on the team contributes to every win.

The Highlanders clearly have an immense amount of offensive abilities. No team this season has held them to fewer than four goals and they have scored over eight goals twice in their last three games. Even though the postseason is a month and a half away, Harwood coach Dave Morse said that they go out every game trying to emulate playoff hockey.

Both Morse and Towne suggested that many of the older players on the team play with chips on their shoulders, as the Highlanders have been knocked out early in the playoffs in each of the past three seasons. They are certainly determined to change the trend this year.

They have a weeklong break before their next game, when they play Burr & Burton this Saturday, January 14, at home.