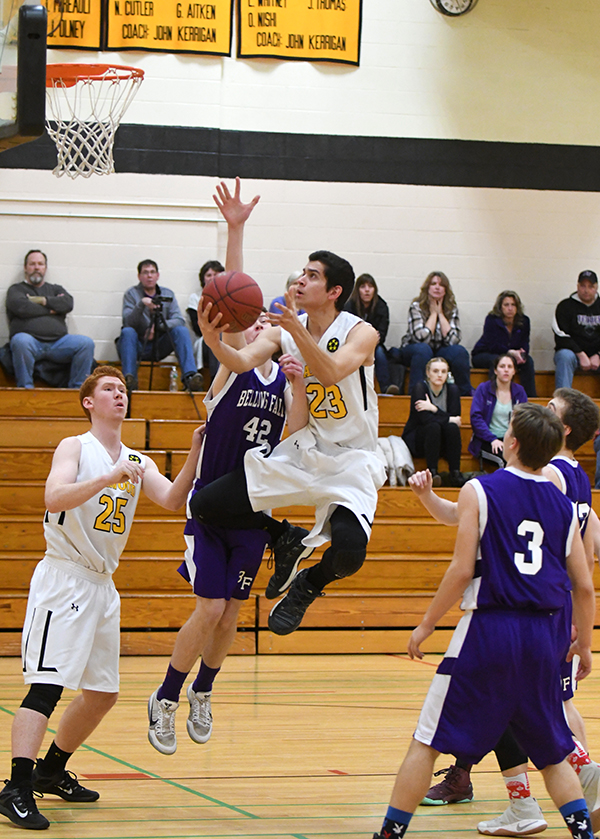 Harwood’s Lucas Barron scored 23 points on Tuesday night to put the Highlanders into the next round of the playoffs. Barron hit two 3-pointers to jump-start his teams scoring. Bellows Falls scored the first points of the game, but Harwood quickly regained the lead and didn’t look back.

Captain Shiv Seethepalli and Jake O’Brien each scored 14 points with many others making it onto the score sheet.

“Lucas Barron and Shiv Seethepalli have been out leaders all year long,” Harwood’s coach Mike Woods said. Woods added that Barron played exceptionally well on Tuesday night, but surprisingly it was not the seniors’ scoring ability that impressed him the most.

“What I was especially pleased about tonight was the fact that he passed the ball very well. He found our open guys and they are able to knock down shots,” Woods said of his top scorer.

The Highlanders carried a 17-point lead heading into the fourth quarter and they were able to give their starters a rest, letting players moved up from JV into the game to experience the playoff atmosphere.

When you win in a home game in the playoffs that’s always fun and it’s great to have happen. You never know how the playoffs are going to go, especially when you’re a seven seed playing a 10 seed,” Woods said while adding, “I think the things we did well tonight were moving the ball around a lot on our offense and mixing up our defenses a little bit.”

Woods was pleased with his team’s effort but still sees room for improvement, most notably in their rebounding, which has been an on and off issue for the team throughout the season. “As I told our team tonight, moving on, we will need to play better,” Woods said.