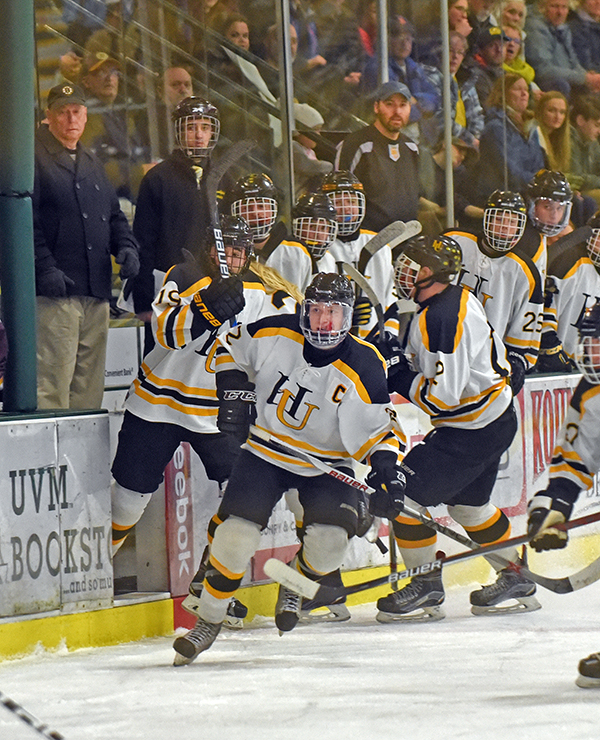 The Harwood Union Highlanders climbed back from a three-goal deficit but were unable to come away with the victory in Vermont’s Division II title hockey game at the Gutterson Fieldhouse arena.

At the March 9 game, North Country’s Mitchell Austin fired the puck toward the net from the boards and it found its way between Harwood goalie Sean Russell and the post, putting the Falcons up 4-3.

Austin’s goal came after an incredible rally from the Highlanders that started toward the end of the second period. Eli Rivers put much needed life into his team with a goal just before the second intermission.

With just under two minutes left in the second period, Harwood junior Colin Green centered the puck and as it sneaked by a North Country defender, Rivers was able to backhand it in, providing a spark that would carry his team into the third period.

Harwood’s Justin Cantwell would make it a one-goal game early in the third period, scoring off a rebound in front of the net. Minutes later Eli Rivers would take the puck high into the slot area and tie the game with Harwood’s third and final goal.

Rivers had been one of Harwood’s best offensive weapons throughout the season and for that he was shut down for much of the night. Whenever North Country had the chance, they took Rivers out of play as best they could. “He was marked, yeah, and you notice when you get to the finals they call a lot less and it gets more physical. So they were stinks on his stick all game long,” Harwood coach Dave Morse said.

Up until Rivers’ first goal, two North Country players, Brady Perron and Dawson Cote, had dominated the Highlanders. The two forwards used their speed and a unique chemistry to get behind the Highlanders' defense and they combined for the Falcons first three goals. They even scored one goal while the Falcons were shorthanded.

“We knew that those were the two guys [Perron and Cote] that everything revolves around. They are very quick to go to the puck and to cut back to the net,” Morse said.

After the game Cote said that he had been playing with Perron since they were very young and he constantly looked for his line mate whenever they created breakaways, which they did often.

Morse said that his team simply came out flat and North Country’s speed put the Highlanders on their heels. “You saw as the game went along we got more comfortable, they got slower and we got faster,” he mentioned.

The Highlanders certainly picked up the pace after the first period and at the end of the night they more than doubled the Falcons in shots on net, but Morse conceded that North Country goalie Dana Marsh stole the show.