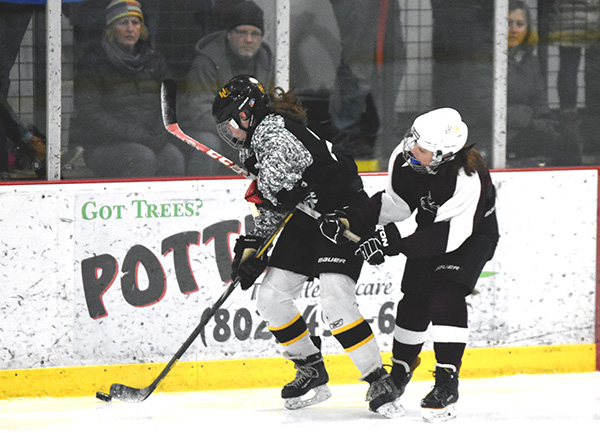 Harwood’s girls’ hockey team defeated North Country Union/Lyndon Institute 6-4 on Monday, February 19, a team that has given them trouble twice this season.

The Highlanders previously lost twice to North Country this season. On December 16, Harwood lost 8-5 and on January 17 they lost 8-7, but the Highlanders got the best of their February 19 matchup.

Harwood head coach Mike Vasseur noted that Ziedins is one of the best skaters in the state, but Vasseur has been equally impressed with the improvement of the entire team.

Vasseur explained that at the beginning of the season Harwood had five skaters that had never played hockey before and each one has come a long way.

As the end of the season nears, Vasseur plans to head to the playoffs. Harwood has a rule where any team with a record under 0.500 may choose to play or to sit out of postseason action, but Vasseur said that he believes the team, especially the seniors, deserves to go.