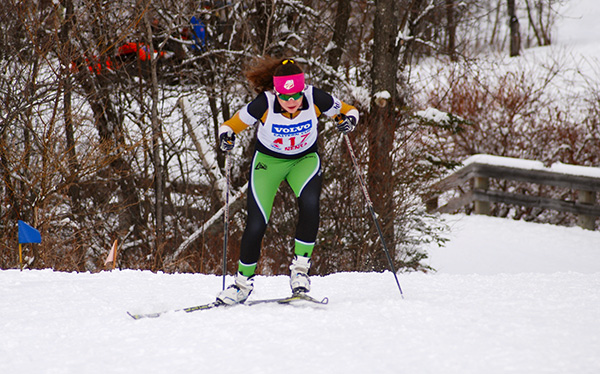 The JV girls’ race was won by Emily McNichols of Burlington High School in 14:11.29. The Harwood JV girls had a very strong race with Tait Plagge finishing second at 14:25.38. Julianne Young was sixth at 15:48.17, with Hadley Kielich in seventh at 15:56.97. The availability of maple creemees was a highlight of the event for all skiers.

On Sunday, February 18, a small group of Harwood skiers represented Harwood in the Vermont State Qualifier for U16 and Eastern High School Championships at Rikert Nordic Center. The majority of the skiers in this event are from Vermont’s private ski academies and ski clubs. It’s an opportunity for high school skiers to race with elite skiers – most of whom are headed to Division I collegiate Nordic teams. The top 18 boys and girls from this race and an additional six skiers from the upcoming public high school state championships will become the 24 members of the Vermont Nordic Elite Ski Team representing Vermont at Eastern High School Championships in Rumford, Maine, in March.

In the boys’ 3K classic race in the morning, Ben Ogden of Stratton Mountain School was the winner. Four local skiers were in the top 20. Finn Sweet of Waterbury, skiing for Craftsbury Nordic, was eighth. Local skiers who represent Green Mountain Valley School did well with Tanner Ketchel of Warren in 16th, Carl Kellogg of Waitsfield in 18th and TK Despres of Fayston in 20th. Walker Caffry Randall was Harwood’s top skier in 58th, followed by Carlton Cummiskey in 88th and Acme Wasi in 101st out of the field of 120. The boys’ 3K freestyle race was also won by Ben Ogden. Local skiers were Carl Kellogg in 13th, Finn Sweet in 15th, Tanner Ketchel in 26th and TK Despres in 28th. Harwood’s Walker Caffry Randall was 54th, Carlton Cummiskey was 74th and Acme Wasi was 112th.

Both of the girls’ races were won by Rena Schwartz of Middlesex representing Green Mountain Valley School. In the girls’ 3K classic, Waterbury’s Phoebe Sweet, skiing for Craftsbury Nordic, was third. Jordi Kulis and Sydney Kulis, representing Craftsbury and Harwood, were 19th and 70th. Harwood’s Mackenzie Greenberg was 95th. In the girls’ 3K freestyle race Phoebe Sweet was fifth, Jordi Kulis was 23rd, Mackenzie Greenburg was 66th and Sydney Kulis was 69th.

Assuming the warm weather does not force cancellations, Harwood will ski at the state meets on February 22 and 26. State champions are determined by combining the results of both days.