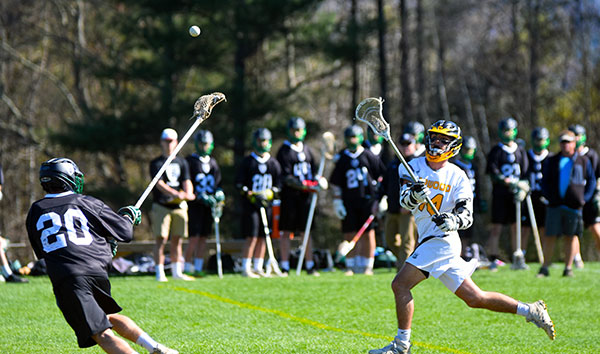 Harwood boys’ lacrosse shook off a slow start in the first half to take down Stowe for second time this season.

Last year Stowe defeated the Highlanders in the Vermont Division II state championship. So far the Highlanders have gotten the best of both matchups, defeating Stowe 16-8 in their first game on April 24 and by an even wider margin, 15-5, on Monday, May 7.

After the first period, the scored was close at 3-2 and by halftime Harwood’s offense had picked up and the Highlanders entered the third quarter leading 7-3.

For the final two periods Harwood dominated the game. Harwood’s defense and midfielders easily thwarted Stowe’s offense, forcing turnovers, and when the Raiders were able to get a shot off, Harwood’s Sully O’Hara was there to stop it.

On offense, Connor Woolley and Ely Kalkstein were able to create fast break opportunities, seamlessly putting the ball behind the Raider defense and into the net.

Harwood coach Russ Beilke said that Stowe’s defense was pressing, allowing Harwood’s attackers to get behind them, and he credited O’Hara with making solid breakout passes from the net.

They had, to Stowe’s dismay, seven unforced turnovers. Part of that is our defense and everything, but when you’re turning the ball over that many times and we’re taking advantage of that, you know, there’s not a lot of teams that can do that and win a ballgame,” Beilke said.

“Today is the closest we’ve come to a complete game,” he added.