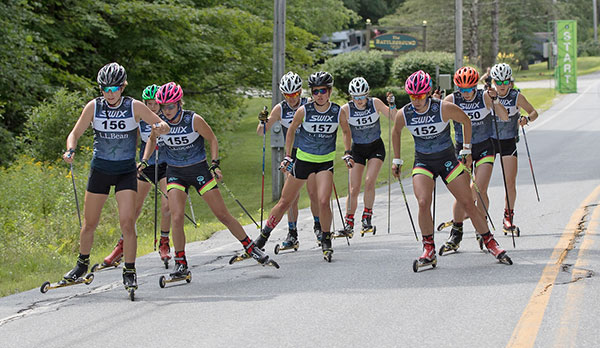 The article on the 2018 App Gap Challenge in the August 16, 2018, issue should have listed Elliot Ketchel of Warren as finishing in fourth place, not Finn Sweet of Waterbury, who placed seventh for the men. Also several women and men finishers were noted as from Waitsfield when, in fact, they were from Italy. The Italian finishers are as follows: for the women, Anna Pradel, 24th; for the men, Bjorn Angerer, 19th; Alexander Kargruber, 33rd; Devis Thaler, 37th; and Simon Primisser, 39th.

With 119 finishers on the August 11 race that had the eastern side of VT Route 17 closed, the App Gap Challenge, a rollerski race to the top of the App Gap was a success.

The race was put on by the 2018 NENSA/Bag Balm Rollerski Race Series.

The race featured some of America’s top skiers who are competing for a cash prize. In the 119 individual finishers for the race, The Valley was filled with skiers from Norway, Italy, USA, Canada, Oregon, Wyoming, Minnesota, and Wisconsin.

One of the racers included 2018 Olympic Gold medalist Jessie Diggins and members of the U.S. Ski Team.

After the race there was a barbecue at Green Mountain Valley School. The kitchen staff fed well over 250 individuals and which was roughly half of the people who watched the race. College coaches, US ski team coaches, and interested supporters were there to watch and cheer.

Community members came out and supported racers as well as joined in the fun afterward. A carnival atmosphere was created by EventSet, with fencing complete with nation flags flying along the MRG parking lot.