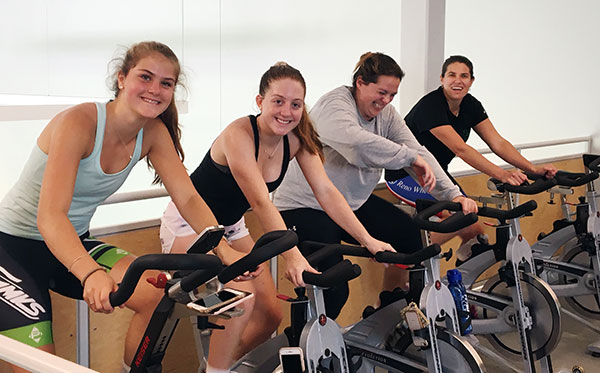 Green Mountain Valley School (GMVS) students committed to spinning constantly beginning at 6 a.m. on August 31 until 6 p.m. in the evening. The goal of the GMVS students is to raise $50,000 for the Kelly Brush Foundation “Stop the Bleed” initiative.

Over the last decade, GMVS has partnered with the Kelly Brush Foundation in its commitment to making ski racing a safer sport. As many know, Kelly Brush, a GMVS alumna, sustained a severe spinal cord injury in February 2006 while racing for the Middlebury College Ski Team.

Last year, GMVS alpine skier Jonathan Davis suffered a life-threatening laceration after falling on his skis. He survived due to the quick efforts of a first responder who had the training and materials on hand to “stop the bleed” to his femoral artery.

Through the Kelly Brush Foundation’s Ski Racing Safety Program, GMVS students hope to raise enough funds to educate and arm every GMVS coach with a “Stop the Bleed" kit as well as send one to two kits to every ski club in the U.S.

GMVS will also be fielding a team at the Kelly Brush Ride held in Middlebury on September 8.