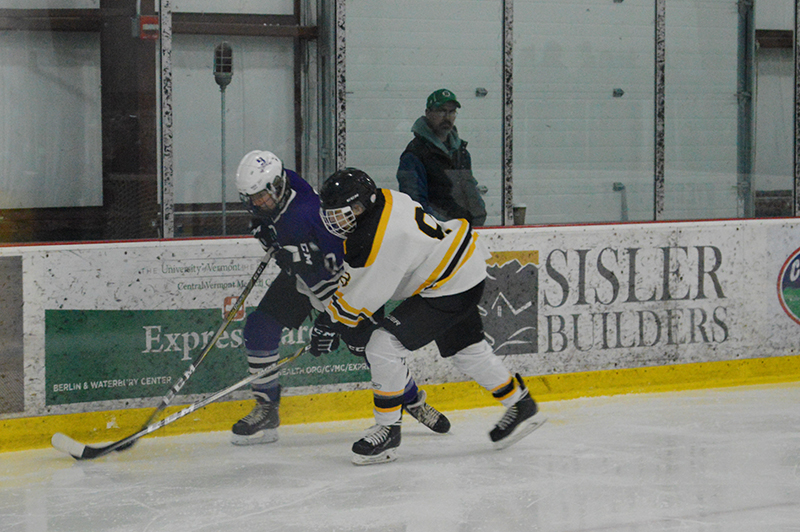 In a chippy game between the Harwood Highlanders and the Colonels of Brattleboro, Harwood skated away with a 4-1 win.

The Highlanders hosted the Colonels on Saturday, January 5, at the Ice Center of Washington West in Waterbury.

Harwood would gain the upper hand in the first period from a goal that was initially shot by Finn O’ Hara and tipped in by the Brattleboro defense. Brattleboro was quick back on the offense with a fast breakaway but was stuffed by Highlander goaltender Liam Guyette.

Leading into the second, Harwood was able to capitalize on their breakout, connecting passes tape to tape. Highlanders would get an initial shot on net but could not sink in a rebound against the Colonels. Harwood and Brattleboro made fast friends with penalty box door personnel as both teams were sent multiple times during the second.

Still leading 1-0 into the third, Brattleboro started the period off with a tripping penalty; minutes later Harwood would score their second goal by Jacob Cantwell, assisted by Reece Anderson and Jake Wells.

Harwood would be sent to the box at 11:44 for an interference call against Tyson Sylvia. Brattleboro was able to take advantage of the power play and sink their first and only goal of the game.

As the minutes wore down, both teams became more aggressive. Brattleboro would call a timeout at 4:08 to regroup. At 1:32 the Colonels would get a penalty. In a desperate attempt to get another goal, the Colonels pulled their goalie. Harwood was able to get it outside of their zone and send Skylar Platt to score on an open net.

Aggression running high, both teams had to be broken apart after the Harwood goaltender was roughed up after making an initial save. Harwood received two penalties, one for roughing and one 10-minute misconduct. With 40.8 seconds left in regulation, Harwood’s Ollie Hammond, a frequent flyer to the penalty box, scored a shorthanded goal sealing the win 4-1 for the Highlanders, who only had three men on the ice.