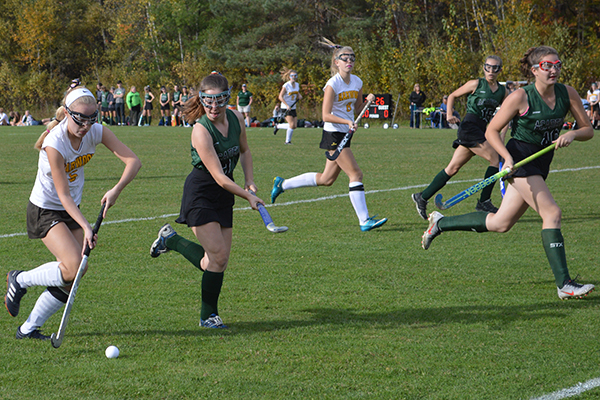 Harwood hosted St. Johnsbury on October 10, where Harwood would score the opening goal in the first five minutes of regulation.

Lady ’Lander Rachel Goodwin was able to net one early on in the first half with team support. In the remaining time in the first half, the Highlanders tried feverously to get the ball up the field to the offensive zone but were weighed down by the amount of defensive corners they called for.

Harwood would hold the lead until the second half when St. J was able to net one past the Highlanders’ defense. The game went into overtime where head coach for the team Katie Alexander said the team played evenly with St. J but was unable to score.

Harwood ended with four offensive corners and seven shots on net. To prepare for their next game against Milton on Wednesday, October 16, as The Valley Reporter goes to press, Alexander said the team will be working on moving the ball up the field and keeping up the intensity when they play.

Girls’ soccer traveled away to play against neighboring rivals, the Montpelier Solons, on Tuesday, October 15, in a game that resulted in a Highlander loss.

The Highlanders’ lone goal came in the first half of the game when Tanum Nelson was able to maneuver around the defense and get a shot on net.

In their upcoming game against North Country, Vassuer said North Country is a strong team and that his team will have to play hard and work efficiently as a team.

Harwood boys’ soccer played against Peoples Academy on October 11. Both teams would sport a scoreless scoreboard until the second half.

Harwood was able to score in the second half when Finn O’Hara passed the ball to Chris James who netted the ball to give Harwood the 1-0 lead. Ten minutes later Harwood’s Gavin Thomsen scored on a pass from Jack Birmingham.

“We moved the ball very well in the second half. With the lead we could take our time and be patient in possession and play forward to create good chances when we got pressed,” said head coach Joe Yalicki.

Yalicki said that he was happy with the second half adjustments the team made.

“Montpelier will be a very quality opponent, which is great for this time of the year. I think they will possess as well as any team we have played so we are going to have to be sharp to capitalize on any mistakes they make with the ball in their half,” said Yalicki.

Head coach for the team Ali Lake said that her team did a good job of resetting themselves after a tough loss in the first and second set. “They came out in the third set and they didn't hold anything back,” said Lake.

Lake added the team had trouble finding the court in this match. “We weren't hitting or serving as efficiently as what I would have liked to have seen,” but she said the team will be working on serving and hitting this week in practice.

“As far as the season, I am thrilled with the growth of this team over the past season. Between six boys that played in most events there is a total of maybe 10 years of golf experience. Compare that to our top three from last year who had twice the experience,” said head coach Brian McCarthy.

“On the girls’ side Maddy Cheney had an amazing first year. I watched her improve every day. She has the best attitude for golf. She didn't let a bad shot affect her and as the season wore on she had more good than bad. We also had five to six other girls who if they come back next season, Harwood girls’ could be a force in DII as well,” said McCarthy.