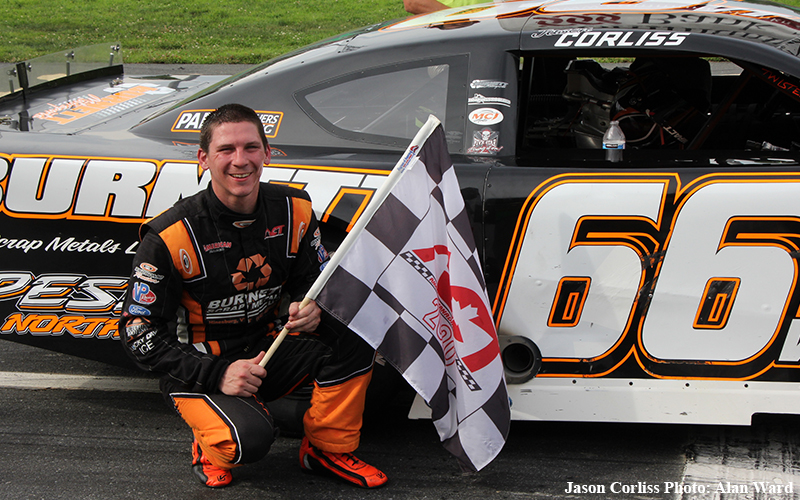 Hometown racer and defending “King of the Road” Jason Corliss crushed the competition at Barre, VT’s, Thunder Road to take the Community Bank N.A. 150 for the American-Canadian Tour (ACT) on Sunday, July 26. Corliss put on a high-banked clinic to lead all but one lap in route to his third straight victory in the event.

A near-perfect day for the 2019 track champion began in qualifying as Corliss earned the pole with a plus 4 under ACT’s “plus-minus” system. Starting alongside a fellow reigning titlist in 2019 ACT champion Rich Dubeau of Plainfield, NH, Corliss quickly asserted himself at the front with Fayston, VT’s, Brooks Clark moving into the number-two spot.

The first of four cautions on lap 15 for David MacDonald’s stalled automobile proved to be Clark’s best shot. The former Governor’s Cup winner got a good restart and led the 16th circuit by half a car length. However, Corliss took the top position right back the following lap with Clark dropping back in line.

Three more yellow flags slowed the event, including back-to-back cautions on the 92nd lap for spins by Nick Sweet and Reilly Lanphear, respectively. The slow-downs allowed Clark and Milton’s Scott Dragon, who triumphed in Thunder Road’s Midseason Championships just two days before, to close the gap.

But Corliss was simply too strong, pulling away each time. After dodging a couple of close calls in lapped traffic, Corliss went on cruise control. While the action was hot back in the pack, it was all Corliss at the front as he rolled to his third win of the season at Thunder Road and 18th of his career.

Colchester, VT’s, Sam Caron blasted his way through the Lenny’s Shoe and Apparel Flying Tiger field for his first win of the season and the second of his career. Caron started 11th in the 40-lap feature, and after dodging an accident coming to the initial green flag, set out on a mission to the front. He was up to third when the second yellow flew with 17 laps complete for Bryan Wall’s spin.

On the restart, Caron went inside Milton, VT’s, Adam Maynard, then outside E. Calais, VT’s, Tyler Austin, taking the lead on lap 23 and flying away from the pack. A final yellow with five laps to go for polesitter Keegan Lamson’s spin gave Craftsbury, VT’s, Michael Martin a shot at Caron. But instead, Martin got into a duel with Barre, VT’s, Jason Pelkey for second, allowing Caron to escape for the win.

Pelkey beat Martin in a photo finish for the runner-up position. Hinesburg, VT’s, Derrick Calkins finished fourth to complete a torrid weekend that has put him back in the championship hunt. Logan Powers, Maynard, Cameron Ouellette, Brandon Lanphear and Kelsea Woodard completed the top 10.

Pittsfield, VT’s Juan “Paco” Marshall earned an emotional first career win in the Allen Lumber Street Stocks. Marshall, whose partner was injured in a traffic accident this past Friday, started on the pole of the 25-lap feature after his crew chief subbed for him at Friday’s event.

The third-year racer had to deal with an initial challenge from Derby, VT’s, Tim Hunt. Then, as the laps wound down, Shelburne, VT’s, Kaiden Fisher — the 13-year-old son of former “King of the Road” Jamie Fisher — was all over Marshall’s rear bumper as part of a six-car pack. However, a determined Paco held them off to join the first-time winner’s club.

Graniteville, VT’s, Frank Putney only led about 10 feet of the Burnett Scrap Metals Road Warrior feature — but it was the right 10 feet. After starting eighth in the 20-lap event, Putney got underneath Williamstown, VT’s, Sean McCarthy for second with three to go as McCarthy attempted to challenge polesitter Tyler Whittemore for the top spot.

As the field exited the final corner, Whittemore slid up the track maybe a foot. That was more than enough for Putney, who stayed glued to the bottom, put the gas pedal to the floor board, and beat Whittemore to the checkered flag by a bumper for his fourth career victory.

Thunder Road wraps up the month of racing this Thursday, July 30, at 7 p.m. with WDEV Radio/Calkins Portable Toilets Night. All four divisions will be in action with the Burnett Scrap Metals Road Warriors running double features to make up their rained-out Vermont Governor’s Cup event.

Admission is $15 for adults and $3 for kids ages 12 and under. Advance tickets are available at undefined with limited attendance. Northeast Sports Network will have a $15 live pay-per-view broadcast at www.NSNsports.net/sponsors/racing.

The ACT Late Model Tour is returning to North Woodstock, NH’s, White Mountain Motorsports Park on Saturday, August 8, at 5:30 p.m. for the Midsummer Classic. The 250-lap, $10,000-to-win event is the longest, richest point-counting ACT event this summer as part of a doubleheader weekend with the Pro All Star Series. Saturday admission is $25 for adults and $5 for kids ages 12 and under with advance ticket sales and camping reservations available at undefined.

For more information, contact the ACT or Thunder Road offices at (802) 244-6963, This email address is being protected from spambots. You need JavaScript enabled to view it., or visit www.acttour.com or www.thunderroadvt.com. You can also get updates on Facebook and Twitter at @ACTTour or @ThunderRoadVT.