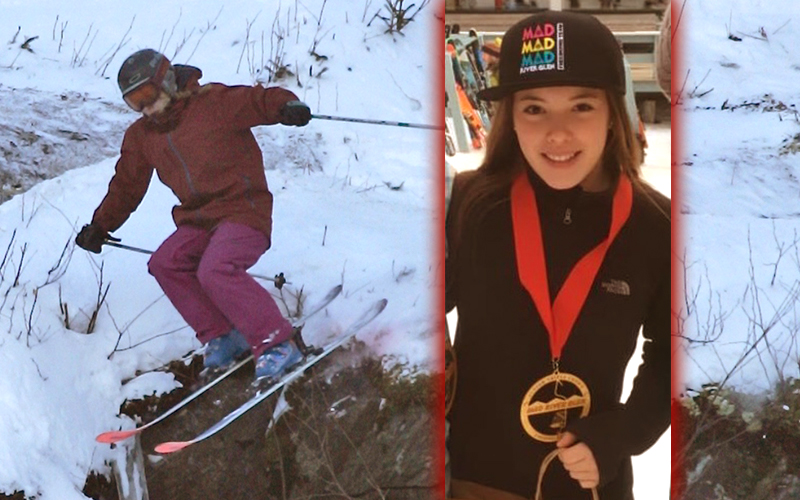 Sophia Bisbee, a 16-year-old Mad River Glen Freeski Team member, has been invited to compete in the Freeride Junior World Championship in Verbier, Switzerland, on March 30, 2021.

Bisbee is the daughter of Waitsfield native, Chris Bisbee (who happens to be her coach), and granddaughter to Dan and Buffy Bisbee. “I was born in Burlington and live in Hinesburg,” said Bisbee. “My dad’s side of the family lives in Waitsfield. I was raised on both sides.”

Bisbee’s dad put her in ski school when she was just 4 years old, which led her to develop a passion for the sport. “We are a big skiing family,” she said.

“Our group is so tight that we’ve all become best friends. On days that we can, like over February break, we go up every day and ski together,” said Bisbee, who said her teammates push her and inspire her to try new things. “We feed off each other,” she said.

Unlike freestyle skiing, which happens in a man-made park, freeride skiing happens on untouched slopes. While both freestyle and freeride skiers do tricks and hit jumps, freeride skiers execute tricks in a natural environment, which includes steep slopes, deep powder, boulders, rocks and vertical cliffs.

“They’ll announce the trail and sit at the bottom,” said Bisbee about freeride judges. “If you ski the steeper part, you’ll get more points on that. If you go off the jumps, rocks and cliffs, you’ll get extra points. They also give points for technique and style,” said Bisbee, who mentioned that, in competition, she might do a 360 off a nature-made jump or mogul.

Bisbee is thrilled to be going to the World Championships, especially since the National Championship event she had qualified for last year was canceled due to COVID-19.

“I like having my dad as my coach,” said Bisbee. “We can talk a lot about things easily. He gives me honest feedback for my training. He’ll tell me straight up if I don’t do something well,” she said. “And then we’ll come home and watch world tour videos together. We are close.”

When it comes to strengths and weaknesses on the mountain, Bisbee cited her competitiveness for both. “I’m competitive. I always try new tricks. With my team, we’re always trying to top each other off. I’m constantly pushing myself with them” she said. “But my competitiveness could be a weakness,” she added. “I have to balance from pushing myself to the point of being dangerous and out of my comfort zone.”

In the future, Bisbee hopes to pursue skiing as a full-time career. “I would love to pursue skiing. I’m on a good path for that right now,” she said. “Unfortunately, freeskiing is new. There’s not a freeskiing category in the Olympics. It’s either park, or big air, or half pipe,” said Bisbee.

Bisbee has even considered branching out into those other areas so she can potentially move on to higher events, like the Olympics. For now, however, her short-term goal is to do well in the World Championships. “My closer goal is to go to Switzerland, do well, and get invited again. And as I get older, to keep moving up in more advanced events.”