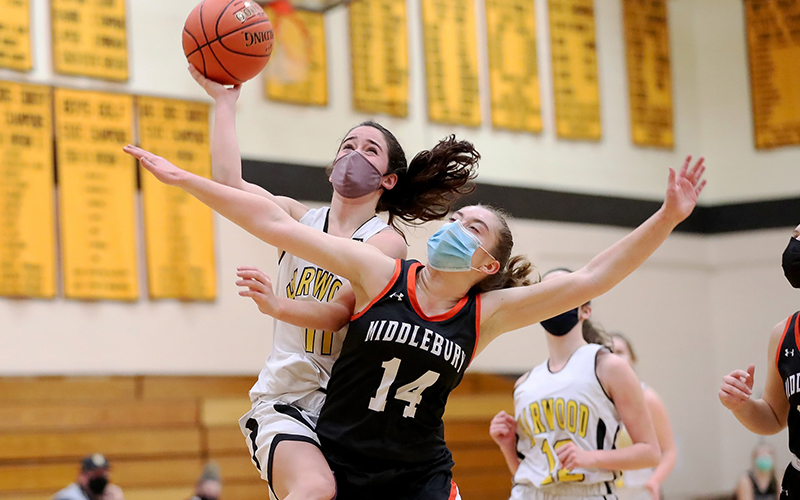 “At the races on Thursday and Friday we battled bitter cold conditions, the coldest this season,” said coach Katie Westhelle. “The girls were really challenged with the courses and hill but the girls are very strong and we have had excellent training! They will shine at states.”

“To see Gretchen Kogut win at districts her senior year was an amazing individual effort to lead the team's success,” said Westhelle.

The girls will move on the States this Friday to compete in the giant slalom race at Smugglers Notch and then head to Cochran’s on Monday for a slalom race.

Last week on March 4, the boys’ Harwood varsity basketball team lost 74-51 to U-32. “Our young guys stepped up and worked us back a little, but we were too far down to catch up against their consistent pressing,” said coach Jay Bellows. Harwood’s high scorers were freshman Tobey Bellows with 11 points, junior Chris James with 10 and sophomore Lewis Clapp with eight.

On Monday, March 8, the boys played Lamoille again since Lake Region was on COVID quarantine.  The Harwood boys lost by seven points with a final score of 48-41.

“It was an evenly played game. We were up by as many as nine in the second half. But turnovers and shots not falling, coupled with going only 2-9 from the foul line ultimately killed us,” said Bellows.

On Saturday, March 6, the Harwood girls’ varsity hockey team defeated Brattleboro in an astounding 10-1 victory. “It was a big win,” said coach Mike Vasseur. “The kids are doing great and really coming together as a team.”

By the end of the first quarter, the Highlanders had a 2-0 lead, with a goal from Louisa Thomsen, assisted by Clara Griffin and Rachel Fernandez, and another goal from Griffin, assisted by Thomsen and Fernandez.

Harwood scored its final goal, an unassisted shot from Griffin, capping the goal count to 10 before Brattleboro scored a loan goal with just over two minutes left on the clock.

Scoring Harwood's first goal off a feed from Skylar Platt was Jonathan O’Brien. After that, Finn O'Hara, set up Platt for Harwood’s second goal. The winning goal was scored by Harwood’s Tanner Woodard.

“It was a fast paced, physical game,” said Harwood coach Shawn Thompson. “Liam made a lot of big saves to seal the victory. The boys did a great job staying disciplined and keeping themselves out of the penalty box.”

The boy’s last regular season game was played Wednesday, March 10, as The Valley Reporter was going to press, against Middlebury at 6:30 p.m. “It will be our senior night,” said Thompson. The boys hold a 5-0 record for the season.

Harwood led 28-8 at the half. Both teams scored nine points in the third quarter. Piper Mattsson paced the Marauders with 20 points.

"We came into the season knowing it's a short season and our goal is to get ready for playoffs," said Harwood coach Tom Young. "We've had some hurdles thrown at us, but a lot of teams have this year. We're going to have a very hard game against Peoples on Wednesday and we'll just do our best.”

"We were happy to come out and dictate the pace,” said Young. “It was good to have a plan coming in and to see everybody execute it as a team. We've thrown some young kids into some new situations with Tanum (Nelson) being gone and I've been really impressed."