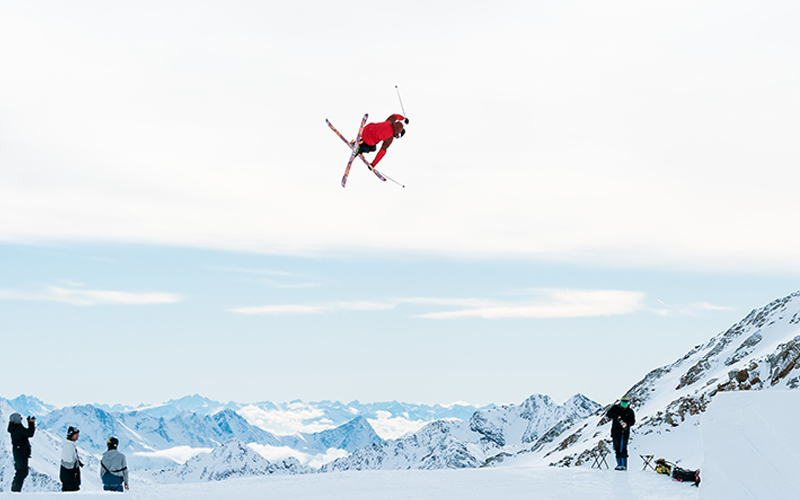 Editor’s Note: This is the second half of an article about Harwood union graduate Cole Derrick. The first half ran in the March 25 issue of The Valley Reporter’s ongoing where are they now series about local kids who have gone on to a measure of fame. READ PART 1

Some aspects of the natural environment in Baishan, China, remind Cole Derrick of Vermont. “There are a lot of birch trees. A lot of the plants and vegetation are the same. Blueberries are abundant,” said Derrick, who lives in the Jilin Province, one of most northern provinces in China.

Other than the blueberries and birch trees, differences abound between Baishan and the Mad River Valley.

Although various internet sites claim the population of Baishan is just over one million, Derrick said it feels smaller than that. “People come here for the winter to work, but besides that, there’s like nobody here,” said Derrick.

“The city is very poor,” he noted. Derrick remembers feeling uneasy about getting his coronavirus vaccine when the team arrived to get shots at an abandoned-looking hospital.

“We thought we were going to go to a real hospital. Technically it was. When we got there, it looked more like an old pharmacy, with this rusty green medical logo sign hanging above it,” said Derrick.

Derrick has a translator, who he hardly uses anymore. “When I speak to the kids, we do half Chinese, half English. I don’t really need the translator anymore, which is nice.” In his free time, Derrick studies digital Chinese flashcards in his hotel room.

“We live in a hotel,” he told The Valley Reporter. According to Derrick, with the team’s nine athletes, four team doctors, one physical therapist, one team leader, one sports scientist and two coaches, the team takes up an entire hotel room floor.

“When we’re traveling, we won’t book a hotel unless we can get the whole floor. And on that floor, we have ski bags everywhere. The physical therapists might have massage tables set up to do acupuncture in the elevator lobby. Our waxing room is in the elevator lobby right now,” said Derrick.

While Derrick gets his own room, the athletes on the team must share rooms with each other. However, these skier-packed hotel rooms are gradually skimming out as the team continues to make cuts.

“We started with 16 athletes and now we’re down to nine,” said Derrick. “Every two months, we have to make cuts. Sometimes the office says, ‘Hey, you have to do a four-person cut now.’”

It’s hard to cut athletes from the team, but team managers insist on making cuts at regular intervals, since only a few athletes will likely qualify for the Olympics. “China creates these goals and takes them very seriously,” said Derrick.

In fact, China is so serious about creating top-tier Olympic freestyle skiers, that it found a way to inspire more national competition to drive its skiers to freestyle perfection.

“Our team was created one and a half years after another team. The government thought that team didn’t have enough competition in China, so they started our team as a rival national team,” Derrick explained.

While Derrick’s team was only supposed to push the original team forward, it ended up succeeding beyond expectations. “In the past two years, not only did we catch up to them, we beat them in the last event both with our boys and girls,” said Derrick.

Now, both teams are uncertain about their fate. “They were telling us that our team would be completely cut if we didn’t beat them,” said Derrick. “But now, they’re worried about their team’s existence, since we’re at the same level.”

According to Derrick, this intra-country competition has put immense pressure on both teams to perform well. “And it totally worked,” said Derrick. “That pressure, it sucked, because we thought okay, if we lose maybe we all get fired. But at the same time, it worked because we really trained hard beforehand. We’re pushing each other a lot.”

Derrick expects that a few athletes from each team will make it to the Olympics. “Both our teams have our ringers,” he said. Still, qualifying will be a challenge no matter what, especially since the athletes are so young and relatively inexperienced.

“They picked pretty young kids for this program, because they assumed slope style and big air skiing was kind of like gymnastics or acrobatics. Which it is, but also, skis and boots are heavy. It’s nice to have a bigger, stronger figure to do the sport,” said Derrick.

However, Derrick knows better than to try to change the system from the bottom up. “The ski teams in the U.S. are not run like the Chinese program. Here, we have a huge chain of command that you can’t really tamper with. You have to follow it, because that’s how you get the support and the money,” said Derrick.

Still, Derrick appreciates that athletes and coaches are well compensated for their involvement in training team programs. “They do put a lot of attention on sports. It’s nice when a program has this kind of financial support, whereas in the U.S., it’s a passion sport. In the U.S. it’s like, if you love it, you don’t need to be paid to do it.”

Moreover, Derrick gets to enjoy some freedoms not afforded to his athletes, like going out to eat. “It’s not expensive to eat out in China. People are always out, calling DDs,” said Derrick who explained that “DDs" are the super cheap Uber of China.

Going out in China is not only cheap, it’s convenient. Nobody needs to bring a wallet or cash. “For everything you do in China, you only have one app. It’s called WeChat. Your bank is connected to it, and every place in China has QR codes. No matter what. Even homeless people use them,” said Derrick, emphasizing the uncanny ubiquity of QR codes.

While Derrick enjoys going out in China, his schedule will likely become stricter as the Beijing 2022 Olympics draws nearer. It’s been over a year since Derrick saw his own family in the states. However, knowing his family is thriving helps him cope with the distance. “They’re all doing really well. Thankfully they’re really healthy. They’re staying busy. If it wasn’t like that, maybe it would be a lot harder. But knowing that everyone’s happy and doing their thing, with some video chats here and there, it’s pretty good.”