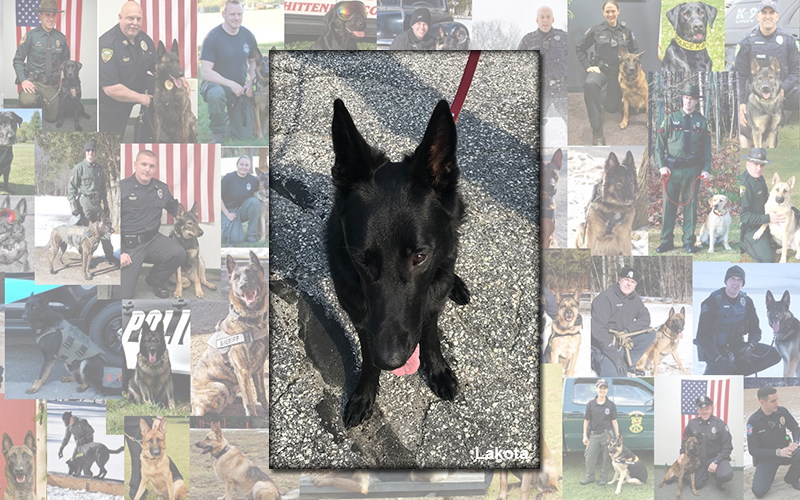 Lakota is a one-and-a-half-year-old full-blooded German shepherd who loves to play. She also has a day job. She is one of the Vermont police dogs supported by the Vermont Police Canine Association which will hold a fundraising golf tournament at Sugarbush on August 13.

She is the sole K-9 unit based at Barre Town Police Department, one of four in central Vermont. Other units are located in Barre City and Middlesex State Police barracks, where one dog is certified and a second is being trained. There are 49 K-9 teams in Vermont and New Hampshire. The Barre K-9 unit serves all of central Vermont and assists other local agencies. In rural wooded areas, there is high need for tracking dogs to assist with missing persons cases. Barre police chief William Dodge said the area is also known for having a high concentration of illegal drugs and the K-9 unit is helpful in tracking for that purpose.

Lakota graduated drug school in February and is currently undergoing training for patrol school. Her informal training began at eight weeks old, when the Barre police acquired her. K-9 units can start drug school as early as six months old. Dodge says the work requires high-energy dogs and Lakota fits the bill. He said people tend to be “more friendly toward police officers with a dog. It bridges a gap with the public.” Though Dodge said the need is rare, K-9 units are also trained in handler protection. In addition to police work, Lakota and her handler visit schools and community organizations for demonstrations, which familiarizes the public with the local police.

The price tag on K-9 units can be in the range of $50,000-60,000, Dodge said, including the dedicated vehicle, the price of obtaining the dog, food and training. Barre has received community donations to help offset the cost. The Vermont Police Canine Association (VPCA) also helps ensure that K-9 teams are supported financially. The 21-year-old nonprofit supports 46 working K-9 teams as well as retired teams throughout Vermont and New Hampshire.

“This could include a bulletproof vest, cruiser kennels and heat alarms, sending teams to specialized trainings and conferences and helping with medical expenses. Depending on what the needs are, we have also helped to cover food expenses and any other equipment that the handlers might need,” VPCA fundraising coordinator Emily Leinoff said.

VPCA’s 15th annual golf tournament fundraiser will take place at the Sugarbush Golf Club on August 13, 2021. Twenty-eight teams will convene to raise funds for the association and Lacey’s Fund, which supports retired K-9 units. Register here for the tournament: https://www.vtk9.com/store/p93/Golf_Tournament.html

“Our association was founded by a canine team in 2000. The founder saw a need to create a nonprofit that could help support a lot of the additional costs to having a canine program that agencies don't always cover. A lot of our departments are able to cover most of the expenses, but we feel strongly that we would rather have a community be able to benefit from the use of having a police canine than for them to choose not to have a canine team because of financial concerns. These teams are invaluable when you truly think about the work they are doing. Several of our teams have been awarded lifesaving awards for their work in finding missing children and lost people, which had these canines not located them, would have had a severe outcome. While I love that these canines are taking deadly drugs off our streets, I have always been in awe of the canines that are out there tracking missing people and are able to get those people reunited to their loved ones,” Leinoff said.

VPCA holds several fundraisers throughout the year, including a fundraiser ball and silent auction, which will be held in November at the Stoweflake Resort in Stowe, the Green Mountain Iron Dog obstacle course, which will be held October 2 at the Vermont Police Academy, and a lawn mower raffle, which raised $20,000 earlier this year. VPCA also has an online store that sells merchandise and accepts donations at http://www.vtk9.com.