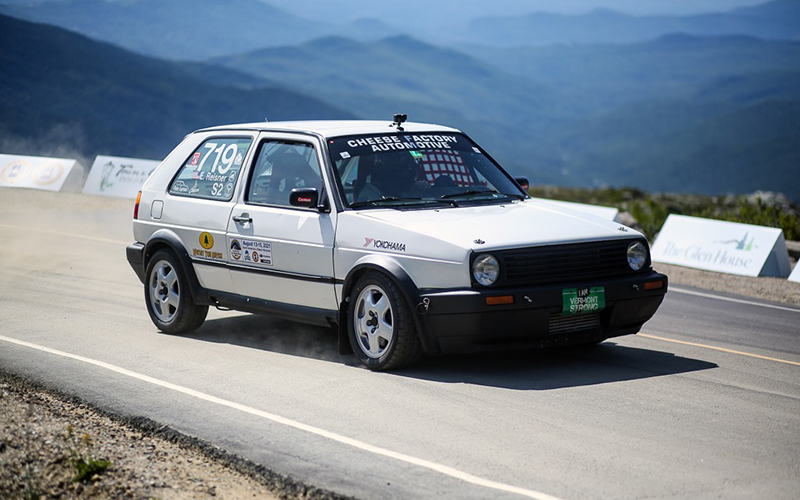 Two Waitsfield local residents, Eric Reisner, Warren, and Seth Achilles, Waitsfield, participated in the Climb to the Clouds car race up to the 6,288-foot summit of Mt. Washington on August 15. Founded in 1904, the race is billed as the oldest automotive hill climb in North America and is 7.6 miles up a steep, technical, winding road to the highest peak in the White Mountains. Reisner noted the race is “the most challenging hill climb” he’d done and called it “mentally-challenging, for sure.” Eighty racers out of approximately 200 applicants were selected. “It’s an honor to be selected,” he said.

This was Reisner’s second time in the race, which happens every three years. He credits Achilles with getting him into hill climb racing and lending him his first race car. Achilles has completed the race several times over the last 20-plus years, as well as volunteering and working at the race for Vermont Sports Car, though he experienced engine failure the last time the race was held and was unable to complete it. He purchased his first race car in 1999 to compete in the Climb to the Clouds, but the race was put on hiatus for more than a decade. “It’s something I’ve always wanted to do,” he said. It had been more than 20 years since he’d completed the race. His time was 7:53, while Reisner came in at 8:15.

“Just making it to the top is satisfactory,” Reisner said. He described the upper section of the climb being above the tree line and said there are parts “where all you see is sky.” He added that the weather on Mt. Washington is often unpredictable and “we were lucky to have good weather.”

Achilles said that, while many other hill climbs in New England are closed to spectators due to insurance policies, the Climb to the Clouds is open to spectators and called it “quite the production,” with a stage and Jumbo-Tron screens to watch. “It feels good to have spectators at the event,” he said. He added that the race is always looking for volunteers and called it “a good, free way to be involved if you’re into motor sports.”

“I would love to do it again,” Reisner said.