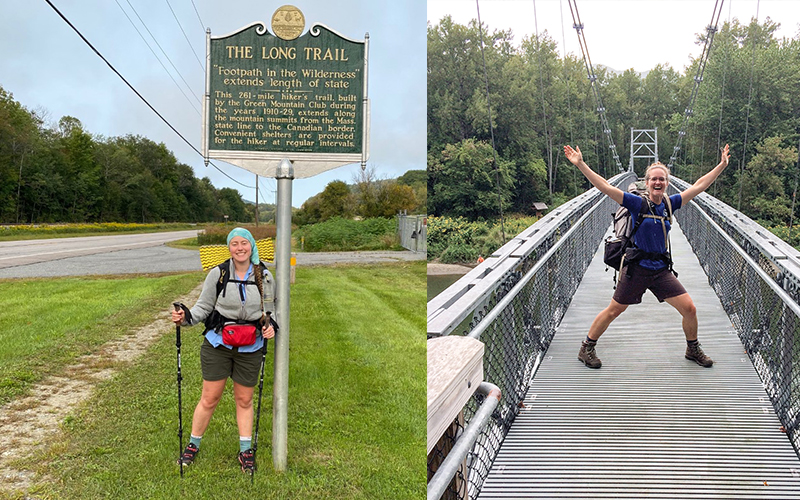 On a recent day in front of Three Mountain Café in Waitsfield, two Long Trail through-hikers who called themselves “Rowlings” and “Point Four” lay hiking backpacks on the curb as they opened packages of food and supplies they’d mailed to themselves. They were eating granola bars and taking a much-needed break from hiking the 272-mile Long Trail that winds through the Green Mountains. They’d hiked from the Massachusetts border and were heading for Canada.

“It’s been awesome,” Rowlings said. “We’re getting into the beautiful parts.” The pair had left for their trek on August 21 and were 18 days into what they anticipated to be about a month-long hike. It was the first time either of them had attempted the hike. They weren’t going for any records, they said, but simply enjoying the journey. The Green Mountain Club reported the average through-hiker takes 20 to 30 days to complete the trail.

When asked what he enjoyed about the hike, Rowlings said, “I love the views, being in nature and the people” they’d met along the way. “Every community we’ve been in has been awesome.”

Completed in 1930, the Long Trail is the oldest long-distance hike in the U.S. The Green Mountain Club, based in Waterbury, protects and maintains the Long Trail while educating folks about Vermont’s trail system. According to the club, late summer and early fall are the best times to hike the Long Trail, avoiding mud season, snow, insects and crowds.

According to Amy Potter, Green Mountain Club Visitor Center manager, in a typical year, the club receives 200-300 applications for end-to-end Long Trail certificates. Hikers can do the Long Trail in sections and still receive a certificate at the end. Some hikers take as long as 30 years to complete the hike. While over 5,000 hikers have received the certificate to date, many others hike without applying. In 2020, the GMC received 555 applications from hikers looking to get out during the pandemic, the most they’d ever received.

“We’ve definitely noticed an increase in people getting outside,” said Potter. In 2020, thru-hikers ranged in age from 7 to 80. Most through-hikers hailed from New England, though some came from as far away as Alaska.