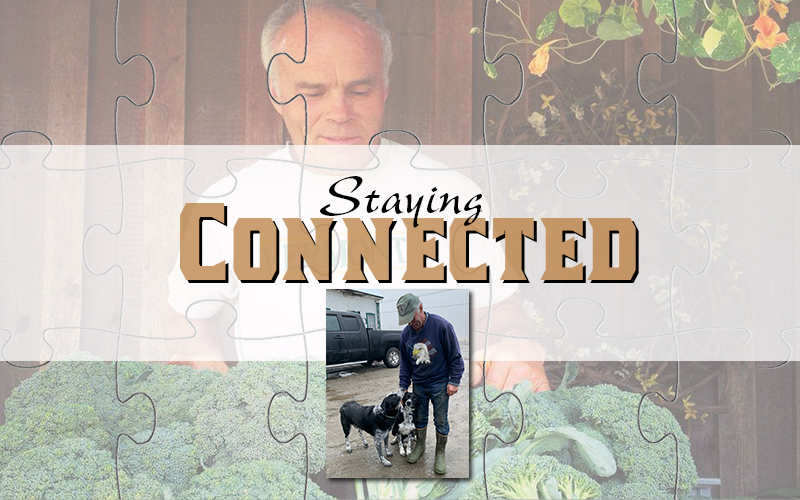 Waitsfield farmer Hadley Gaylord can’t wait much longer before he has to decide to fix or cut bait, or in his case continue planting for this season or give up on it.

“I’m treading water. I’m trying to decide why I want to be a farmer. I haven’t got anything in my greenhouse. I can’t wait much longer. The only thing I’ve got going is a couple thousand tomato and pepper plants. I’ve got all kinds of seeds and I need to make a decision,” he said.

In addition to organic produce, Gaylord sells meat and eggs and he said that the meat and eggs business has been busier this time of year than ever, but not enough to make up for the loss of sales from vegetables if the local farmers’ market doesn’t open.

Gaylord’s dilemma is made more difficult because he can’t hire people to help him plant and run his greenhouses. He needs at least a couple of people who can work 30 to 40 hours a week.

Like many people he is scared and unsure about the future.

“I’m freaked out, besides economically. I’m scared in a bunch of different ways. We don’t know what’s going on here and how long it’s going to last and we’re all going to get this virus anyway,” he said.

While the future of the farmers’ market is not yet known, Gaylord says he can envision setting up his own market at the farm stand on Saturdays since he is only a mile down the road.

Lotty Roozekrans, manager of the Waitsfield Farmers’ Market, said that she and the board are hoping to be able to open the market for the season and said that it may be delayed.

“It’s likely to start out as an abbreviated version that would adhere to all state guidelines. We’re in constant contact with our vendors. It’s a lot for these small businesses to handle and to pivot to a new model from the current model where they have an established base of customers. NOFA-VT and the Vermont Farmers Market Association and market managers all across the state are working hard to get some sort of approval for an abbreviated market. I think we can all figure out how to reconfigure our markets to make it safe,” she said.

“Farmers’ markets need to be classified as essential businesses, because they are, for the vendors and the customers,” she added.

Gaylord is concerned that a delay in opening the market could mean missing the big weekends like Memorial Day and the Fourth of July.

“Losing those days would be awful” he said.

The lack of anyone’s ability to predict how and when Vermont and the rest of the country will reopen is also weighing on him and he fears it will keep tourists away from Vermont.

“We need those people. If we don’t have those visitors in The Valley it’s going to look like it does right now,” he said in reference to the empty roads and parking lots.

As for the seedlings, Gaylord said he’d keep watering them for now, so they keep growing. He’s conflicted and he’s not sleeping well and doesn’t know whether to pull the plug on this season.

“This is driving me crazy. I mean, I ask myself what the hell I’m doing this for, but I realize that it’s my drug. This it what I live for. I’ll miss sharing it with everybody so much,” he said.