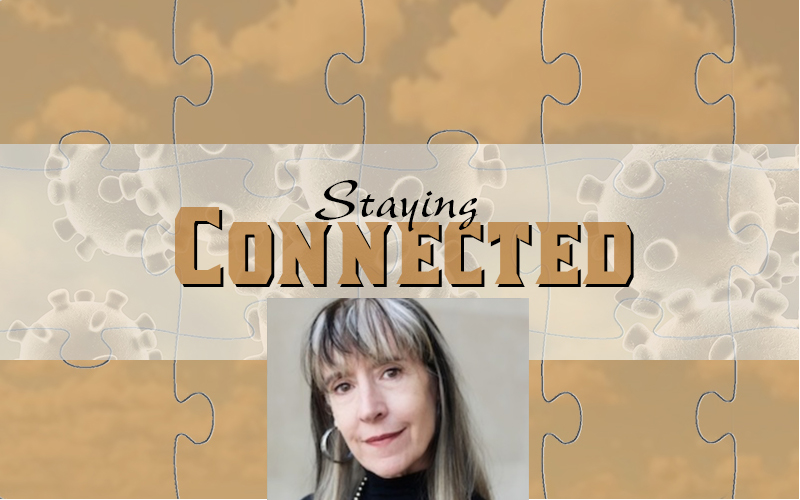 After years of working as a paralegal in the corporate world, Sallie West decided it was time for a change. “I was successful at my job, but it wasn’t enlivening me at all,” said West, a Mad River Valley native.

In the early 1990s, West applied to graduate school for marriage and family therapy, got her master’s degree from Antioch University in New Hampshire and has been a counselor ever since. “That was probably the greatest thing I ever did for myself. I love my work, and I love the people I work with,” said West.

While West accepts clients to her home office in Fayston, she’s also an avid online therapist who meets with a number of her clients via phone or video chat.

Even before Vermont’s Stay Home, Stay Safe order was issued on March 24, forcing therapists to turn to online platforms, West was familiar with online counseling and its benefits. With teletherapy for instance, West found that “there were very sensitive topics that people were much more comfortable talking about, like sexual issues or deep-seeded shame issues.”

Online therapy is also convenient for the client. For instance, West works with many young parents who live in rural areas and can’t find or afford child care to cover session and commuting time. “In a rural area, it’s a really critical option to have,” said West, speaking of online therapy.

The convenience of remote therapy applies to West as well. Working online allows her to travel and visit her family on the West Coast while maintaining a regular schedule with her clients. “After this I expect not to go back to face to face,” said West, referring to postpandemic times.

“I started doing online therapy before it was popular. Now, it’s really hit its stride,” said West, recognizing that the coronavirus pandemic has put many other therapists in her remote-healing shoes. “The efficacy of it has really been born out by this awful tragedy that we find ourselves in,” said West.

West explained that people who might have been hesitant about online therapy before are “jumping right on it” because now they have no other choice. Since the pandemic hit, West has received an influx of calls, as well as an influx of new patients who seem eager to stay on with her.

One reason for the new flood of online therapy seekers in Vermont nowadays may have to do with the unique family situations people find themselves in under coronavirus prompted work-from-home orders. Many couples are now living under the same roof 24/7 for the first time ever.

“What I’ve found is that situations where both parents are working at home and also have small children is really pushing people to the brink,” said West. “Not to the brink of divorce, but to the brink of their stress and anxiety,” West clarified. “And there’s no way they’re getting 40 hours of work in. Absolutely not.”

With couples spending more time together than ever before, the necessity to work on communication has never been so prevalent, especially since in quarantine there’s no escape, said West.

West explained where communication can go wrong among quarantined couples. “Without communication, we make assumptions about what our partner is thinking or doing. We create stories in our heads about the other person's motivations,” said West.

The role of therapy, West explained, is to teach people to stop themselves in the midst of a blaming-oriented thought frenzy and to analyze those thoughts in a nonjudgmental way. “People quickly find out that these stories and assumptions are very flimsy. When we move away from immediate judgment toward curiosity, we tend to realize that our partner isn't really the asshole we think they are,” said West.

When couples fight, the corrosive aspect of their arguments often comes from a tendency to ride the wave of anger until it bubbles out of proportion. “Half the time people get to the end of a power struggle by threatening divorce and it started with some inane thing like, ‘You left a wet towel on the bed,’” said West.

West’s timeout model is designed to help couples stop power struggles in their tracks by teaching people how to recognize their triggers and immediately transition into self-soothing, rather than egg on an argument. Yoga, reading, dancing, painting or cooking are some self-soothing activity examples. However, West finds her own self-soothing haven in the outdoors. “I think the best kind of self-soothing is getting outdoors,” said West. “It gives you some perspective and makes you realize you’re a part of something bigger.”