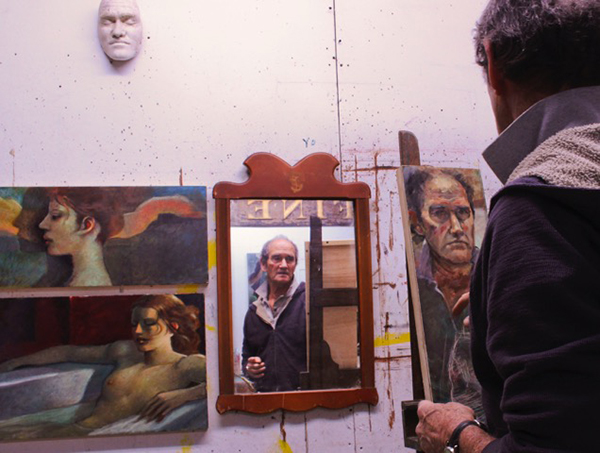 On July 29, The Bundy Modern in Waitsfield is hosting a reception to honor Warren artist Billy Brauer, celebrating an exhibit that covers 68 years of drawings, paintings and etchings. In a recent interview, Billy talked about growing up in Queens, New York, where drawing was second nature to him. “I received absolutely no encouragement from my parents,” he said. (His mother saved only one drawing from all those years, a self-portrait he drew when he was 10.)

Billy enrolled in the School of Visual Arts, choosing the illustration department when he realized other incoming students could out-think him. While there, he thrived under the mentorship of his uncle-in-law, Federico Castellon, a celebrated surrealist artist. “As an illustrator,” he said, “I learned how to look at story or theme. The concept of design was different. I took these concepts later into serious paintings.” He glances around his studio, pausing to observe some of the paintings that will be exhibited. Most are figurative. “These are Renaissance-inspired paintings with contemporary design,” he said, pausing to lift his large cat, Hector, off the table.

The studio evokes an earlier era, maybe a Man Ray photograph of a painter’s studio, Paris, circa 1950. High ceiling. The wall of art books, the cat sleeping now on a high stool, the slightly dilapidated but inviting sofa, with table lamps nearby. And paintings everywhere. “This is my living room,” Billy says. He drives to the barn to paint every day, a pattern that began when he lived next door.

Four large recent oil paintings of women inhabit one wall. In one, a nude woman is gazing into a pond; in the next painting a nude woman lies in a supine position in a rowboat. “She is Stella Maris, Latin for star of the ocean,” Billy said. The far wall is occupied by smaller paintings on the right and a museum-size painting of a voluptuous woman sitting in a chair wearing a dress, legs splayed out, one of the few that didn’t sell back in the 1990s. Billy is glad she’s still there. “It’s a looser-style painting,” he said. “I can be very literal.” He’s never sure what the final painting will be. “I never name my painting until they’re done,” he said.

Reviewers describe his portraits of women as sensuous and mysterious. A raven is painted next to the head of a woman; on a train two passengers are going in different directions and different speeds. Two women are sitting together, but a leg belonging to someone else protrudes from the left side of the canvas. He was quoted as saying that he “likes the idea that something is taking place off the picture plane.”

Billy props self-portraits against the lower wall including one of a handsome man with dark penetrating eyes, high forehead and gentle mouth looking straight out. “That was in 1988,” Billy says. Back then he dressed in white linen suits and black and white shoes and often wore a fedora.

“Clothes to me were like costumes,” he said. Picking up a recent self-portrait he says, “Unfortunately, this is what I look like now.” I want to say you are still handsome but don’t.

We moved on to etchings, done the old-school way. Billy showed me a copper plate and said, “It’s important that the artist make the plate.” It occurs to me that Billy trained the way an apprentice did in the Middle Ages, as an artisan who knows every aspect of his craft. He became involved with printmaking in the early 1960s and won a prize from the National Academy of Design for his work Duchess of Urbino. That same year he was part of a major exhibition, New Talent in Printmaking, held by the Associated American Artists. The Brooklyn Museum bought the entire show and Billy’s prints continue to be shown. “Artists today are getting sick of digital imaging,” Billy said. “There’s a resurgence of interest in the old-school method of printmaking.

Billy arrived in Vermont “through sheer luck,” he says, in 1969. “I met people I never knew existed,” he said. “In Queens people knew nothing about the world, but here, folks were into the environment and they were living off the land.” He laughs. “I bought a house in Warren for $15,000. There was nobody here.”

He painted. But he also farmed and became a part of the community. He started teaching art classes in Montpelier, a practice that has continued for over 40 years. In 1976, he received an individual grant from the Vermont Arts Council and began to focus entirely on painting.

He married another artist. He was trying to get into galleries. “Do you want to know how I bullshit my way into the Chase Gallery in Boston?” he asked. (He showed at the prestigious Chase Gallery on Newbury Street for a decade.)
Of course.

He said, “I went to the owner. He said he liked my work, but I was too expensive. ‘Are you selling a lot of what you have?’ I asked him. He said no. As long as you’re not selling, you might as well not sell expensive paintings. We sold out my first show.”

The paintings were mostly of dancers, slender, elegant women in tango poses, legs wrapped around a man. Women in motion. Billy describes his paintings as “shapes next to shapes and colors next to colors. I use a single light source and a shallow visual depth to create tension and dramatic light and dark patterns. ... I like to create an alluring mood in my paintings that attracts the viewer and then gives them something to hang onto.” The first painting that sold at the Chase Gallery was called Night Dance, and a client from Stowe is lending it to Billy for the retrospective. “I only have here what was left over from shows,” he said.

The Patricia Rovzar Gallery in Seattle picked him up. For 15 years he painted for shows, 20 paintings a year and they sold like crazy. When he decided he didn’t want to be known as the “guy who did dance,” he began other paintings like Erotic Dreams of Lenora, painted in 2001, with a reference to Edgar Allen Poe and The Raven.
After he divorced, he told neighbor David Cohen that he was looking for a model with a long back. David said he should meet Wendy Westmacott, who lived in Warren with her two children. They went to a Mozart concert at the Round Barn and eventually they married. That was 14 years ago. People assume from Billy’s earliest paintings that Wendy is the model, and he has to say no, that she wasn’t around then. But he has his own Cinderella story. “I had the glass slipper,” he says, laughing. “I was looking for someone. And I found her. My paintings are inspired by her. She’s definitely a muse.”

He has spent almost a year working on this show. “Where am I now?” he asked. “I had a talk with my friend John Anderson recently, a retired architect who is now painting. ‘Why don’t you just have fun?’ John said. ‘Just paint.’”
Billy smiled, “I look and still want to finish the ones that are in this room.” Yes, the ones about to be taken to The Bundy Modern.

Brauer’s show will be hung at The Bundy Modern in Waitsfield from July 30 through September 5. The gallery is open on Saturdays and Sundays.

The Bundy Modern Gallery, a recently renovated, mid-century modern gem, is located at 361 Bundy Road, Waitsfield, just 2 miles south of Waitsfield off Route 100. The building is spectacular in true modern style with all structural elements visible: walls of glass, brick parapets, massive wooden beams and Vermont slate floors. The exhibition will be open on Saturdays, Sundays, and Labor Day from noon to 5 p.m. or by appointment.

An opening reception will be held Friday, July 29, from 5 to 8 p.m. RSVP to This email address is being protected from spambots. You need JavaScript enabled to view it..