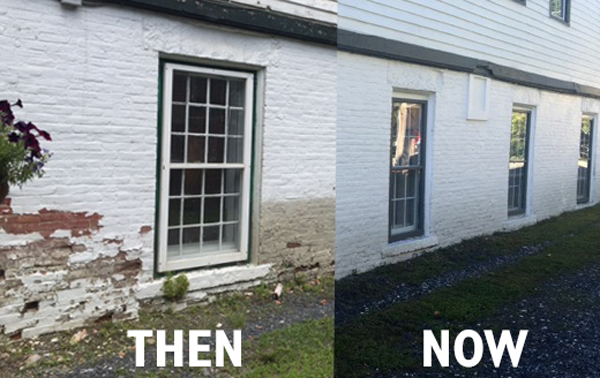 All are invited to a mural painting celebration at Walker Contemporary Gallery on Bridge Street in Waitsfield on Sunday, September 25, at 10 a.m.

Gallery owner Stephanie Walker had the idea to have local kids paint the exposed white wall on the side of her gallery to create a safe space where kids in The Valley had a voice and could express themselves.

The initial response was enthusiasm all around, except from the bricks themselves. They were peeling and paint wouldn’t sitck. After a year of work on the bricks, there is a bright, white wall of bricks ready for mural artists.

“And, the timing couldn’t be better – two weeks ago the window at the gallery was broken by some shenanigans, which made me think we really, really need to find ways to incorporate the kids into the community, again; give them a voice and safe space that they feel they have some ownership,” Walker wrote in an email.

The main design of the mural will be led by Burlington-area artists Anthill Collective. There are also four boys from The Valley who are regular skateboarders on the street who will be working under the guidance of the Collective.

“More than the mural being a place for these kids to have creative expression, I'd like it to provide a space for alternative expression. Anthill's work, rooted in street art and skate culture, doesn't often have a lot of support/exposure in the area and is, therefore, often misunderstood, dismissed and even criminalized. It would be great if the mural offered an opportunity to shed a different light on alternative culture. Most importantly, I'd like the mural to offer the kids this thing they can look at and say, ‘I did that!’ and feel some ownership in their community,” Walker wrote.