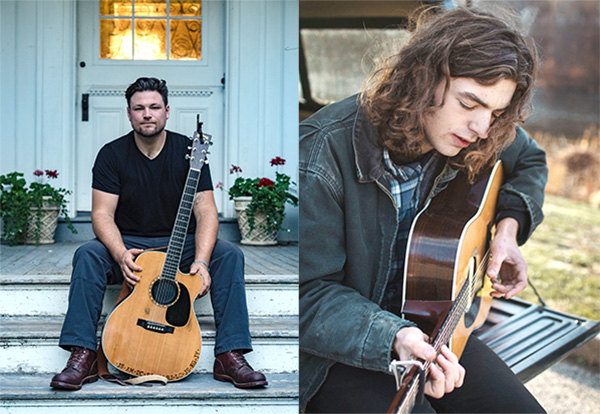 Straight from the New York City alternative folk club scene and the eastern U.S. folk festival circuit, Flanigan and O’Reilly have both been turning heads and winning over fans with poignant original music informed by their rural American and Scottish roots.

Flanigan, who hails from the Woodstock, NY, region, plays an eclectic blend of progressive folk and percussive fingerstyle laced with poignant lyrical truths of his past. His rich, husky voice provides a heartfelt medium for his evocative lyrics highlighting the rural landscape of his compositions.

He has shared the stage with Session Americana, Dwight Yoakam, Sean Rowe, and Corey Glover, and recently received accolades as a Kerrville Grassy Hill New Folk Festival Finalist and as an emerging artist at the Falcon Ridge Folk Festival. He is touring in support of his new album, “Shades of Blue,” which reviewer Lourena Ann Gallagher describes as “an acoustic adventure into romantic reminiscence, a tuneful tribute to the adrift and their yearning to find the way back home and fall bodily into the outstretched arms of a long-missed lover.”

Opening the show, Lorkin O’Reilly will showcase his lo-fi folk and Celtic Americana musical sensibility. Since immigrating to the United States from Scotland in 2014, O’Reilly has been making a name for himself as a commanding new songwriting talent. His unique transatlantic approach blends old-country inspired open tunings with direct and personal reflections and poetry. His writing portrays not only his own reality but experiences faced by many: the purgatory between childhood and adulthood, between new home and old home, and the overarching struggle of finding a new identity.

O’Reilly is touring in support of the August 24 release of his debut CD, "Heaven Depends,” a collection of songs that range from traditional reels to twanging Townes Van Zandt-esque imagery. He was recently featured at No. six on Spotify’s Fresh as Folk Playlist. He has shared stages with Larry Campbell and Teresa Williams, Charlie Parr, and Nadia Reid.