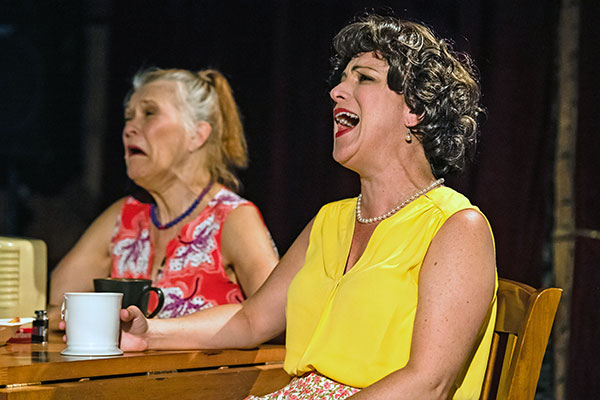 The Skinner Barn was hot under its rafters on the evening of August 1, but Katy Blake’s voice as Patsy Cline in the production of “Always … Patsy Cline" gave audience members goose bumps.

The play, directed by barn owner Peter Boynton, hit the stage with boots a-stompin’ as audience members were active throughout the production’s entirety, whether it was singing, clapping or dancing along. Crowd pleaser and fellow female lead Susann Fletcher, who played Louise Seger, was full of humor as the storyline progressed portraying a fan who became a pen pal to the famous singer.

The production is based on the true story of the real-life friendship between the two ladies who met while Cline was on tour. Over one night of staying up late and chatting, the two became close friends who bonded over similar life stories. The real-life pair of Blake and Fletcher had an on-stage friendship chemistry that was undeniable.

Through the production’s story, the audience was treated to a wide variety of the classic melodies of Patsy Cline’s greatest hits. Songs ranged from one swinging beat into a do-si-do clapper, to the slow methodic lullaby tearjerkers that had the audience reminiscing on their own past love stories.

Blake’s tremendous rendition of Cline’s version of “Faded Love” composed by John and Bob Wills held the crowd in awe, as did the other well-known classic “Crazy” written by Willie Nelson which Blake put her own spin on. The play also showcased fun song mash-ups with hits such as “Sweet Dreams” by Don Gibson and “She’s Got You” by Hank Cochran.

The live five-piece band of Michael Halloran, Brennan Mangan, Marc Edwards, Justin Burgess and Nick Dettor presented audience members with sweet, sweet music as well as comical banter with the two female characters. The band was showcased in western-style dress with the cowboy hats to match. Mangan, who played the steel guitar, rocked the house with his smooth and satisfying chord playing.

The play was a crowd pleaser as well as fan favorite as it will continue August 8 through 12 with all shows starting at 8 p.m.