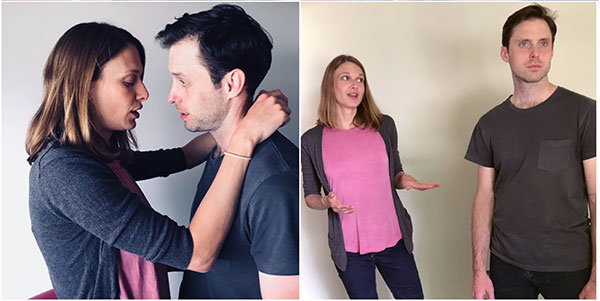 Scientist Marianne meets beekeeper Roland at a party. You could say that science and romance collide in this play by Nick Payne. Critic Ben Brantley of the New York Times wrote about the play in 2015: “This production takes the most elemental of dramatic set-ups — boy meets girl — and then spins it into a seeming infinitude of might-have-been alternatives.” New Yorker critic John Lahr wrote after seeing the London production in 2012, “It’s rare these days … to encounter a play which owes nothing to theatrical influences and which exists as a singular astonishment, at once eloquent and mysterious.” What they are praising is fine writing, of course.

Director Joanne Greenberg of Montpelier said, “’Constellations’ is kind of like a ‘Choose Your Own Adventure’ story, except there are multiple forks in the road.” (She is referring to the first interactive children’s book series created by local author Ray Montgomery.) “The play looks at how the tiniest change in the detail of our lives can lead us on completely different paths,” she added. Who has not looked back and wondered about the road not taken?

The couple who are performing in this show — Maren Langdon Spillane and Dominic Spillane — are professional actors who trained in New York City and returned to Vermont to raise their family. It was they who recommended the play to Greenberg, who stresses that it takes actors of this caliber to perform the roles that require them to exist in parallel universes while onstage. Their expertise was proven two years ago when the couple, under the direction of Greenberg, performed “Gruesome Playground Injuries” at Phantom Theater. They all fell in love with the intimate space and are thrilled to be back.

“Constellations” opens on August 23 at Phantom Theater in Warren and runs through August 25. Performances are at 8 p.m. Call 496-5997 for reservations and go to www.phantomtheater.org for information and directions.