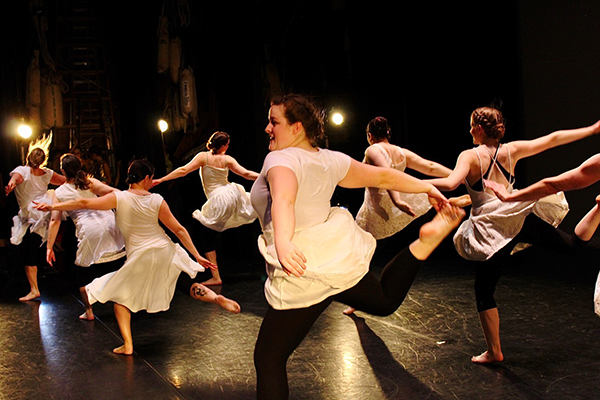 “New Works” – a traditional evening of dance, including modern jazz, ballet, hip-hop and other miscellaneous styles – will kick off Phantom Theater’s summer season on July 6 and 7 at 8 p.m. The dancers teach at the Contemporary Dance and Fitness Center in Montpelier. Performing at Phantom Theater provides them the opportunity to choreograph and perform works that display their talent for enthusiastic audiences.

Phantom Theater at the Edgcomb Barn in Warren has been a mainstay of Mad River Valley entertainment for over 25 years. Tracy Martin, current artistic director, has lined up a balance of drama, music and dance for the summer. Drama includes “Every Brilliant Thing,” a one-woman show staged by Middlebury Actors and starring Aly Perry (July 12 and 13, 8 p.m.) and New York City actress Orlagh Cassidy reading from her memoir, “It’s in the Play,” on July 21 at 8 p.m.

The music lineup at Phantom runs the gamut from Scrag Mountain Music on August 10 to the Miranda Henne Quartet on August 11 and 12 and from the Peter and Will Anderson Trio (August 16) to folksinger Ian Flanigan on August 14. A dance party at the theater with DJ Lucas Bates on July 23 will pack the house. All music events start at 8 p.m.

The surprise gig of the year is WESLI, winner of the Juno (Canada) World Music Album of the Year (2019), performing on August 17 at 8 p.m. (venue opens for food and Lawson’s Finest at 7 p.m.). This promises to be a sell-out show and with that in mind the Phantom board has moved that venue to Sugarhouse Soundworks in Waitsfield. Advance tickets are on sale now via https//sevendaystickets.com/events/Wesli-8-17-2019.

Popular professional dancers Sarah Rose, Hanna Satterlee, and Isadora Snapp are returning August 29 through 31. They are offering the Mad River Valley Performance Platform, with movement-based workshops open to the public and performances running two nights, July 30 and 31. With “The Phantom Shuffle: A Week of Dance,” Tracy Martin and fellow dancers Willow and MaryChris are presenting exciting new works, and performance artist Noah Witke Mele will explore the blurred line between his own life and art in “Dream Bitch or Else!!!” Those shows take place August 6 through 9.

A preview article about every show will appear weekly in The Valley Reporter, and people can learn more at www.phantomtheater.org for dates and times, cost of admission and directions.