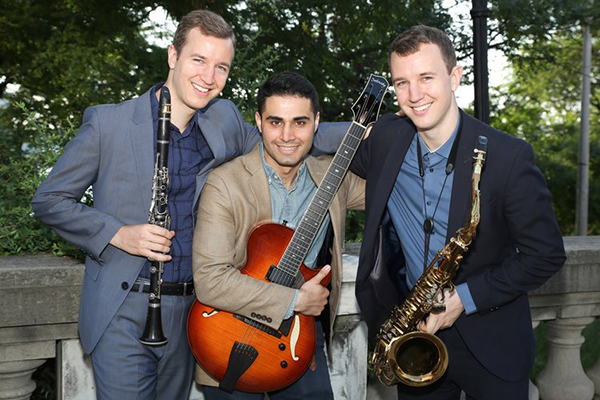 Hailed as virtuosos on clarinet and saxophone by the New York Times, identical twins Peter and Will Anderson have performed nearly everywhere – in 40 U.S. states and throughout Brazil, Japan and the United Kingdom – and with nearly everyone in the jazz world – including Wynton Marsalis, Paquito D’Rivera, Lou Donaldson and Jimmy Heath. On Friday, August 16, they will bring their assorted woodwinds, along with guitarist Felix Lemerle, to the stage at Phantom Theater for a performance of American Songbook gems, New Orleans hits and Brazilian bossa novas.

The brothers understand the natural degree of intrigue that audience members bring to a performance by identical twins. But in the context of jazz, their close bond plays a critical role by adding to the dynamic musical interplay.

“We’ve been playing side by side for over 20 years,” says Will Anderson. “Playing jazz involves improvising and reading musical and nonverbal cues. My brother and I have gotten very good at anticipating what the other one will do next and it makes it fun to play together.”

The program they’ve chosen for the Phantom Theater performance will focus on popular and approachable compositions and standards. “The main goal as performers is to entertain the audience and have them feel good,” says Will. “We want the audience to have a renewed interest and appreciation for jazz music. We want them leaving happy, feeling more inspired about the beauty of the world, forgetting about their frustrations and problems. It sounds cliche, but this is why we do what we do.”

The Peter and Will Anderson Trio performance at Phantom Theater will begin 8 p.m. Admission is by donation.