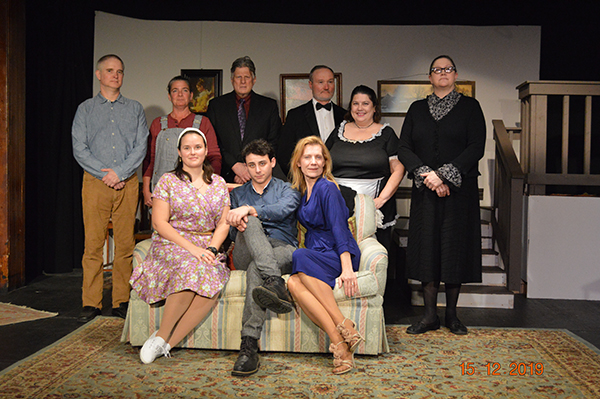 One thousand dollars for a new play. Now that’s the kind of contest any playwright could get excited about. Well, the Valley Players Theater in Waitsfield holds such a contest ... annually.

It all started in 1982 when Audrey Mixer, a devoted member of the Valley Players, passed away from cancer. She had been very involved with the Valley Players on stage while her husband, Richard Mixer, was more of a behind-the-scenes kind of guy. Stage managing was his gig. In addition to loving being on stage, Audrey Mixer was also quite invested in supporting budding playwrights. Because of all that, Richard Mixer donated $1,000 in memory of Audrey to start the Vermont Playwrights Award.

The idea caught on and a group of people donated money the following year to establish a fund in order for the award to become an annual tradition.

“Support was strong and interest rates were great so the award was granted from this fund for several years,” remarked longtime board member Sharon Kellermann. Eventually the fund dried up, but the Valley Players Theater board has continued supporting the award ever since.

An award has been granted almost every single year of the past 36. There are generally eight to 12 plays submitted each year. While it was originally open to Vermont residents only, that soon expanded to residents of New Hampshire and Maine in order to increase the number of participants. The play must be full length, a nonmusical and cannot have been previously produced or published.

It’s safe to say that the contest has seen over 400 new plays. There have been two two-time winners, one of them in consecutive years. The first winner, “Out of Sight ... Out of Murder” by Fred Carmichael, is actually part of the Valley Players 40th anniversary season and opens on January 17 for three weekends. Carmichael went on to publish 50 plays during his lifetime.

While there have been a variety of judges over the years, the organization of the program has been consistent. The late Jennifer Howard was in charge of publicity and communication with the playwrights until just a few years ago. Brian Stone organized the judges and developed the criteria for awarding a winner until sometime in the 1990s. Sharon Kellermann took over for Stone when he moved south and she is now in charge of the entire program.

So, interested in writing a play? Been trying to get published but always running into closed doors? This completely open-to-all contest is exactly the ticket. The deadline for 2020 is February 1 and the judges make their decision by the middle of May. While not every winner makes its way to our stage, the Valley Players have certainly produced more than a dozen of them.

Plays should be mailed to Valley Players Theater, P.O. Box 441, Waitsfield, VT 05673, or emailed to This email address is being protected from spambots. You need JavaScript enabled to view it.. More information can be found at www.valleyplayers.com/vt-playwrights-award.