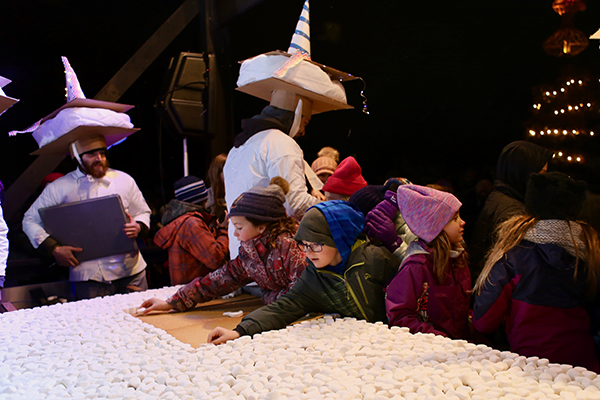 It’s all about the math and the documentation when attempting to break a Guinness World Record for the world’s largest s’more, which currently stands at 267 pounds.

Camp Meade in Middlesex will attempt to break that record as part of its second annual Winter S’morestice Celebration on Saturday, December 28, from 4 to 8 p.m.

S’morestice architect and Camp Meade spokesperson Russ Bennett said this year’s s’more will be weighed and documented. Last year at the inaugural S’morestice Celebration, a 4-by-8-foot s’more was made, which at 32 square feet was bigger than the 5-by-5-foot s’more made by the current record holders.

This year Bennett and bakers are hoping to make a s’more that is 5 by 12 feet or 60 square feet. Organizers have rented a 4-by-4-foot platform scale, which will be delivered and calibrated in advance of the s’more-making to weigh the s’more.

The graham crackers are being made by Red Hen Baking Company and will be individual 18-by-20-inch crackers that are glued together with frosting and assembled on a large plywood peel, which will be placed on the platform scale.

There’s the chocolate, some of it molten, according to Bennett, who quickly amended that statement with “maybe not molten but melted.” Both melted and solid chocolate made by Rabble Rouser will be used.

The scale doesn’t lie. Here’s what Bennett predicts in terms of the math:

“We will video and document all the steps of making and assembling the s’more. There will be a procession where the s’more is layered with marshmallows and carried out to the masses to be set on the stage. The marshmallows will be toasted with flame throwing torches and the top coating of chocolate will be layered and poured on before the top graham cracker is placed,” he added.

The s’more will be cut with swords and shared with the crowd. The s’more is one part of the S’morestice Celebration, which runs from 4 to 8 p.m. and features pizza from Red Hen baked in the turtle community bread oven that was built for the Great Vermont Bread Festival last fall along with other soups, foods, cider and winter libations.

Additionally, the event features fire artists and dancers along with “burnaments,” which participants bring and affix to a bonfire structure and send them off into the great beyond. There will be an evergreen maze as well as a bouncy house for kids. The fire-centric focus of the event goes beyond the giant bonfire. There will be warming barrels of fires for hanging around and a large urn of fire for warmth and conviviality.