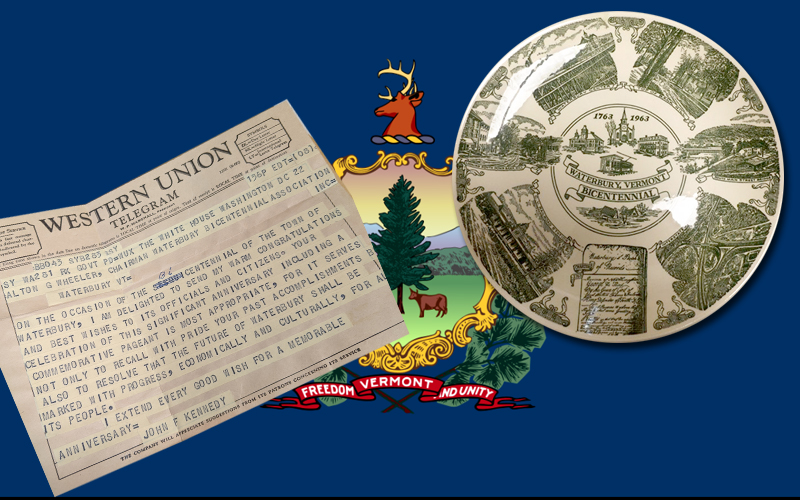 I learned many things about myself, my parents and the town of Waterbury during the summer of 1963. That was the summer Waterbury celebrated its bicentennial. Until that point, I viewed my hometown as a typical sleepy small town where nothing really happened. We’d have an annual Fourth of July parade and festivities, but from my point of view at 12 years old, that was about it.

My father was a dairy farmer and worked seven days a week. Having fun wasn’t something we did as a family. I was, therefore, quite surprised to learn we were actually going to do something fun as family and would be participating in the bicentennial.

When it came time to prepare for the bicentennial, my parents became completely involved with the festivities. One of the first things to happen was two groups were formed, “The Bicentennial Belles” and “The Brothers of the Brush.” Each group was subdivided into smaller groups of about 15 to 20 each. There were literally hundreds of members in each of the two main groups. My grandmother, Claire Marshall, was with “Gabbin Grange Girlies” which was perfect for her. My mother and sister, Shirley and Phyllis Marshall, were with the “Bristlettes.” Each ladies’ group made their own period dresses to appear old-fashioned. My father, Dwaine Marshall. was a member of “The Itchy Bristles/” I was too young to be a member of any group. As a member of the Brothers of the Brush, you were required to give up shaving so that made it very easy to walk around town and figure out who was participating. To commensurate this, the town had a small parade and ceremoniously had a funeral and buried Mr. Ray Zor. These were the fun early events leading up to the bicentennial week.

The town hired a professional choreographer, Phillip R Frable. He had very impressive credentials and it showed. He really knew how to put on an extravaganza. The theme title of the bicentennial was “Trails to Thruway.” This implied the town started with a few Indian trails and ended with a thruway, which had opened a few years earlier in 1960.

Though the Bicentennial officially opened on Saturday, June 30, 1963, and ran until Saturday, July 6, our work as participants started many weeks earlier.  Auditions were held on the second floor of the fire station. One evening Mr. Frable selected me and a girl about my age to try out for a scene depicting a Civil War solder leaving his hometown. At the end of the scene we were supposed to have a nice goodbye kiss, but the girl absolutely refused to kiss me and put up quite a scene. On the other hand, it sounded like a good idea to me, so I wasn’t complaining. Unfortunately, another couple, a few years older than us got the part. My sister, who is about 10 years older than me, and my father, tried out for a scene of which I don’t remember the subject matter. During this scene she was supposed to slap his face. They ended up getting the part and for six nights, my sister slapped my father. She didn’t want it to look fake, so she really slapped him (perhaps that’s why she got the part). My father would say after the performance that she didn’t really have to slap him that hard, but she put her heart into her art. So while I missed out on kissing a pretty girl for six nights, my father had to endure a little bit of pain.

I did pick up a couple parts, but I was basically an extra. I was one of the pioneer families and I was also a Civil War soldier. With no speaking parts, I just walked across the stage with everyone else. There is a picture of me with my cousin, Daniel Marshall, by the stage. Our Civil War uniforms don’t look too bad, but our sneakers look a bit out of place.

The performances were held in the field by the community swimming pool. They had set up a humongous stage and support buildings. This is the same field where the Fourth of July celebrations were held until things got too crowded and the town had to find a larger space. The performances would start at 9 p.m. each evening and consisted of 17 episodes, the last episode being a wonderful fireworks display. I’d never seen so many fireworks before in my young life. If you wanted to buy a general admission ticket to see the performances, it would cost you $1.50, but I think it was well worth the price.

Word of our bicentennial even reached Washington, DC, as we received a congratulatory telegram from President Kennedy. Though I suspect someone from this area may have tipped him off.

The town merchants accepted wooden bicentennial nickels during this period. Though there’s not much use for five cents today, a candy bar would cost me 5 cents and a soda 10. So with three wooden nickels, I’d have a nice snack. The merchants also joined in the fun by displaying historical items in their storefronts. Each day of the week had a theme, such as Agricultural Day or Homecoming Day and, of course, Independence Day on July 4.

Everyone in town seemed to be involved in the bicentennial. I have never seen so much civic commitment before and nor have I since. It was a very exciting time to experience and I feel lucky to have been part of it.

Saturday, July 6, was our last day of celebrations. That was also the day I became aware of my mortality.  At what is now known as the Rusty Parker Memorial Park, in the early evening, they held the time capsule ceremony. Being a young fellow, I was right up front, so much so that I could easily peer down into the hole they had dug for the capsule. I was standing on the south side of the hole as I remember peering at all the lights across the road in the shopping center. During the ceremony, they’d hold up an item, describe what it was and place it in the capsule. About the only thing I remember was a letter addressed to the residents 100 years from that moment in 2063. After the ceremony, I was quite concerned I wouldn’t be able to see them dig it back up again. It was the first event in my life I wasn’t going to see the completion of. The next few days I kept pondering this unsettling situation. Finally, I came up with a solution that put my mind to ease. Since this was going to occur far in the future in the 21st century, I decided that by then, advances in modern medicine would make it common to live to 112. At this point in my life, I’m 69 and I feel that modern medicine has failed me. I don’t expect to see 2063 and will not have the opportunity to see it dug back up. The 12-year-old me would find that to be very disappointing indeed. I asked around and there is no record of what was actually put in the capsule, so I guess 43 years from now it will be a surprise to everyone.

In 2063, my children will be in their mid-80s and my grandchildren aged from almost 50 to 65. I know that life takes you many places and things can get very busy. But it would be my greatest honor if one of my decedents could find the time to stand up front of the crowd next to the hole, stare at the shopping center across the road and watch closely as they dig up the capsule. The 12-year-old in me would find that to be very reassuring.

There is a hard-covered reference book on the second floor of the library titled, “Waterbury Vermont Commemorative Book.” This was an invaluable source of information to help me write this article. There is also an original soft-covered book in the second floor of the Waterbury Historical Society. There used to be two books, but I felt the $5 donation was a bargain to enable me to have my own copy.

To those of you lucky enough to be part of Waterbury’s Tricentennial I hope you have as much fun as I did a hundred years prior.