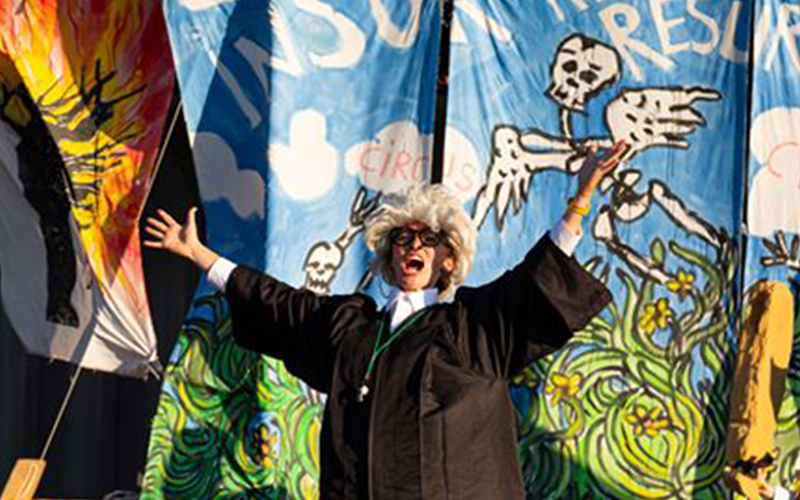 Camp Meade in Middlesex is organizing and promoting “The Insurrection-Resurrection Service Circus,” a physically-distanced, yet socially-together event to raise funds for the Bread and Puppet Theater.

“The Insurrection-Resurrection Service Circus” is this summer’s contribution to the Bread and Puppet Circus tradition beloved by audiences worldwide for nearly two generations – a bright, raucous melee of short acts governed by a brass band, addressing the heart of the current moment using diverse puppetry styles and spanning many moods, from slapstick to the sublime.

Bread and Puppet’s founder and director, Peter Schumann, says the show is “a service for citizens, aliens and immigrants alike to demonstrate the ills that inspire uprising against callously incompetent government and the tragedies that result from that callous incompetence and call for resurrection.”

The Bread and Puppet Company is just back from a short regional tour of “The Insurrection-Resurrection Service Circus” and is performing it one more time for Vermonters who may have missed it in Glover this summer, or may want to see it again in its latest version.

Sideshows by several local performers associated with Bread and Puppet will precede the circus and an exhibit of large Bread and Puppet banners and Peter Schumann paintings will be on view around the performance area.

The event will take place Monday, October 12, with cabaret-style, reserved seating. There will be 10-foot diameter circles with four seats inside, so each seat can be separated by 6 feet or more.  The circles will also be separated by 8 feet in every direction.  Doors will open at 1 p.m., with sideshow performers beginning at 2 p.m. and “The Insurrection-Resurrection Service Circus” performance kicking off at 3 p.m. Red Hen will provide pizza for sale and the Liquid Time Bar, operated by Lost Nation Brewing, will have snacks, beer, wine and nonalcoholic beverages available for sale as well.

The Green will be open free of charge to the public until noon and for ticket holders only from 1 to 5 p.m. (open to the public after the show).

Bread and Puppet Theater is an internationally celebrated company that champions a street-theater brand of performance art filled with music, dance and slapstick.  Its shows are political with huge puppets made of paper mâché and cardboard. Founded in 1963 by Peter Schumann on New York City’s Lower East Side, the theater has been based in the Northeast Kingdom of Vermont since the early 1970s.