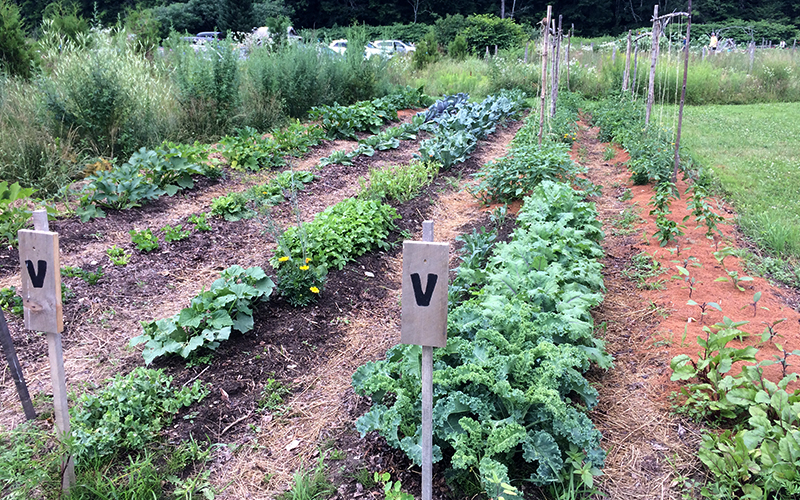 Victory gardens were born out of necessity. They were created during World War I and made a comeback in World War II. The U.S. government promoted the idea of using backyards, vacant lots or wherever there was space to plant gardens. American families could contribute to the war effort by growing their own produce, thus, leaving more food to be exported to the troops.

Lareau Farm, Waitsfield, donated the15-foot-by-40-foot plot. As the garden started up in the spring, local businesses and organizations like Bottles and Cans, Yestermorrow School and Vermont Wine Merchants donated to it. Individuals, like master gardener Kitty Werner, Waitsfield, contributed their time and money too.

Equipped with land and seeds, Tompkins’s victory garden was ready for planting by June 9. That’s when Tompkins and 17 other volunteers got to work. “By the time I got here, it was already part way through the growing season,” said Donna Mackie, Fayston resident and garden manager.

Mackie moved to The Valley in early summer, when the victory garden was well underway. However, according to Tompkins, Mackie is now an extremely valued member of their team. “At this point, whatever Donna tells me to do, I’m going to do it!” Tompkins said.

Summarized, their mission statement emphasizes the role of the garden as a producer of “nutrient-dense foods” for those who don’t have access or cannot afford it. The victory garden's mission statement says, “The vegetables grown will be sold at a minimal cost or free of charge to families and individuals in need.” The produce was sold from the Mad Stand, located at Lareau Farm, which was constructed by Hannah Yerks. The profits from the stand were then donated to the local food shelf.

“We grew a huge array of crops,” Mackie said. Vegetables that mature earlier in the growing season like lettuce, tomatoes and peppers, and tomatillos were grown. The tomatillos grew “astonishingly well,” according to Mackie. Crops that mature later were also grown so that there was always food to be sold or given to those who needed it, like Brussel sprouts and kale.

Tompkins assured that no pesticides or herbicides were used. “We were squishing all those bugs with our fingers!” said Tompkins.

“We shared a lot of what we grew with some resident woodchucks that live in the area, which was kind of fun! To see the biodiversity flourish at Lareau Farm was pretty amazing,” said Mackie.

In future years, the garden will offer more than vegetables. Mackie said that they’d like to have educational classes around gardening and agriculture, special speakers and maybe even some cooking classes to help folks preserve their vegetables or use them right away. Tompkins admired the sense of community she felt when people would come help or when folks would donate their own vegetables to the Mad Stand.