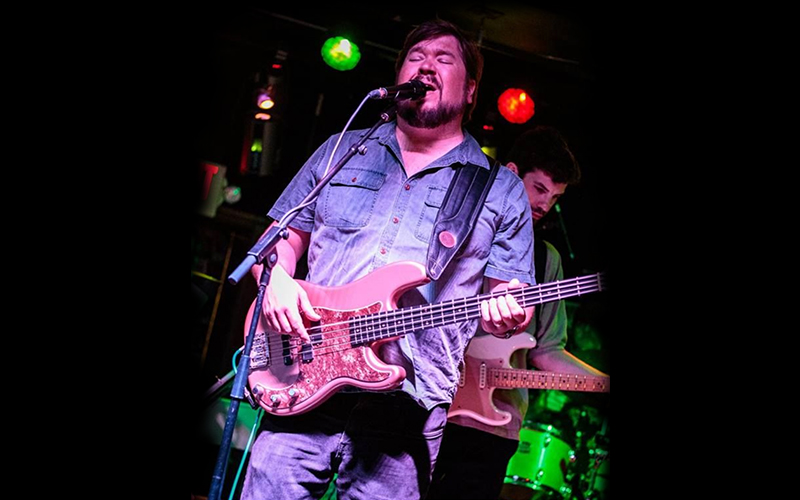 Coronavirus is drying up The Valley’s music scene. “It’s not really going, not a lot of it anyway,” said Alex Budney, Fayston resident and local musician. “Nobody’s doing much of anything now. It’s too cold to play outside and playing indoors is a little risky.”

Budney is a base player and a DJ, who has been involved in The Valley music scene since he moved four years ago. In addition to playing in various bands, Budney used to run open mic night at the Local Folks Smokehouse on Thursdays, and he is an administrator of “The Mad River Valley Music Scene” Facebook page, a group dedicated to sharing information about live music events in The Valley and Waterbury and promoting the work of Valley-based musicians.

Before coronavirus, The Valley music scene was flourishing, said Budney. “Compared to other communities and towns this size in Vermont, it was thriving. Any given Thursday, Friday or Saturday in The Valley, you could see one to four bands, which is pretty amazing and probably not pay a dollar for it,” said Budney.

Budney used to play often at Slide Brook Tavern before moving to The Valley permanently. “I’ve always loved it here,” he told The Valley Reporter. “There are a lot of musicians, a great sense of community, lots of things to do and music to see. And the people are supportive of local music. The musician community here is pretty awesome,” he said.

According to Budney, the combination of coronavirus and bad weather is taking the biggest toll on the musician community now. “Vermont kind of figured out how to do outdoor stuff towards the end of the summer,” said Budney. While the weather was favorable, Valley musicians were able to find gigs both in and out of The Valley at a variety of outdoor events, which included live music drive-ins.

But as the weather turns colder, the opportunity to see live music is dwindling. “Around here, not many have done the indoor thing.” Only Zen Barn, a bar and restaurant in Waterbury, has been hosting live music events. The most recent event was the restaurant's Rock and Roll Dinner on November 21, which allowed people to join in person or from afar with a live stream. While the musicians weren’t wearing masks, a shield of plexiglass hanging from the ceiling before them created a barrier between the musicians and the audience.

“They (The Zen Barn) are still doing indoor at whatever capacity they’re allowed to with spaced out tables,” said Budney. “It’s a tricky thing. These places need to stay alive and music venues are closing at a very rapid rate.”

With gig opportunities few and far between, musicians have been forced to get creative. “Streaming was really popular back in March. A lot of people survived by doing that, including myself. I was DJ-ing on Facebook a couple times a week,” said Budney, who also turned to radio as an outlet for his craft. “I have a show on WMRW that keeps me busy one day a week,” he said.

Despite these pandemic-friendly musical outlets, the lives of local musicians have been irrevocably changed by the pandemic. Budney’s own musical career is a prime example.

Before coronavirus, Budney was playing music full time without leaving The Valley. “Since I’ve been here, I’ve managed to keep busy without leaving The Valley between gigs at Sugarbush, Mad River Glen, The Hostel, The Smokehouse and Zen Barn,” said Budney, who played in six bands at once, one of which was a was a wedding band that kept him as booked as can be. “Between all those bands, that was keeping me busy with five to seven gigs a week.”

When coronavirus hit, however, everything changed. “I went from being booked for months to zero gigs” said Budney. “Now I’m working some part-time jobs, because I don’t have a choice.” For a while, Budney was doing window washing. He’s also thinking about getting a part-time ski-mountain job for the winter.

When asked how community members could help support local musicians during this trying time, Budney suggested purchasing music, among other things. “A lot of local small acts have their albums on platforms like Band Camp, where you can pay a minimum of $10 for an album, but you could pay $100 if you want. Purchasing local artists’ music goes a long way,” said Budney.

Tipping live at stream shows is another way to support local musicians. “A lot of local musicians are doing the live stream thing, and more often than not they put their Venmo and their Pay Pal there for tips,” said Budney.