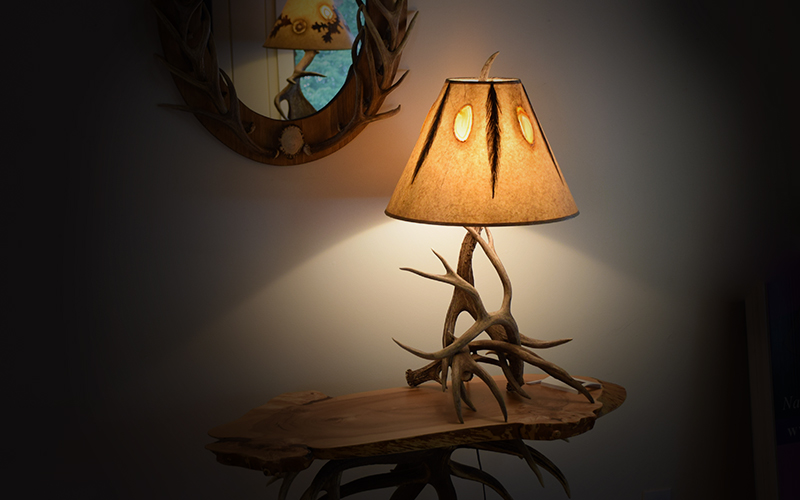 COVID-19 brought with it many things, including the cancellation of many traditional venues for artisans to sell their wares.

In The Valley alone, the Mad River Valley Craft Fair was canceled for in-person shopping with an online option. For the first month of the Waitsfield Farmers’ Market only food vendors were allowed. This month Meg’s Events’ Moretown Artisans’ Sale was canceled in person and went online.

The Valley Reporter caught up with a few artisans and others affected by the cancellations, including Ken Kenia of Mad River Antler. Kenia, who lives in Fayston, creates lights, chandeliers and other pieces using shed antlers from moose, deer and elk. All of his shows for 2020 were canceled.

He doubled down on his online presence and his online gallery and on social media and created a newsletter. When he’s not creating new pieces, he’s creating content. He also used some of the COVID downtime to reorganize his shop to make it more efficient.

For foliage season, he opened a pop-up gallery in the Mad River Green Shops with a photographer friend Josh Axelrod. There both had products and Kenia saw plenty of farmers’ market visits and some sales.

At the Artisans’ Gallery on Bridge Street in Waitsfield, spokesperson and one of the gallery’s founding partners, Lori Klein, said that the gallery was doing very well and had been since retail businesses were allowed to reopen. She said Thanksgiving weekend shopping was strong.

“Last Friday, I panicked because I had 12 people in the store – but it was fine. Everybody is careful and masked and we have hand sanitizer,” she said.

“I think people want to shop locally and support artists. We’re definitely behind for the year, but not horribly behind like we should be having been closed for three months,’ she added.

The gallery is managed by five partners and represents the work of over 150 Vermont artists and artisans. Klein said that inventory remains high at the shop because so many of her artists were unable to go to their regular trade shows and craft fairs.

“Our artists are keeping us well supplied,” she said.

Like most event planners, Meg Schultz, Moretown, owner of Meg’s Events, canceled every festival, every wedding and everything else except the December Moretown Artisans’ Sale which she turned virtual.

“It’s going really well. I had a lot more artists sign up than I expected. I thought I’d have two dozen and I ended up with 80. Several of them had to shut off their store fronts because they sold out of things,” Schultz said.

Schultz said that the sale -- normally held at Moretown Elementary School had gotten some good press which generated a lot of sales.

As 2021 rolls around she said she’s gotten some inquiries about potential weddings for next season but says it’s too early to know if she can commit.