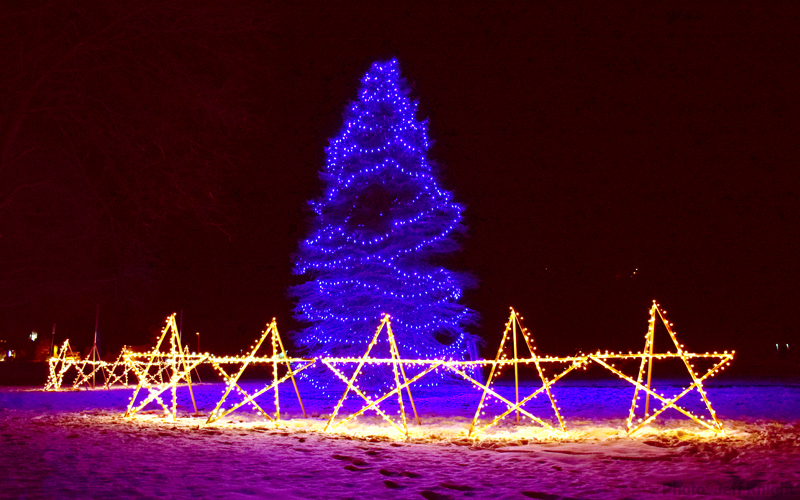 In 2013 the Mad River Valley was ramping up the annual Festival of Lights celebration for the holiday season. Local businesses were encouraged to decorate their offices, buildings, exterior conifers, etc. with their best displays that would not only be officially lit up on the same night but would also be subject to a judging panel who deemed some lucky winners the tallest, brightest and most brilliant.

At the time, Dr. Corin Bauer, Fayston, of Balanced Life Chiropractic rented a space in Historic Waitsfield Village area and wanted to contribute to the decorations being created by other business owners and the first star was made for the side of the Fuller House.

The following year, in 2014, after some renovations to town roads and infrastructure there was even more initiative for the holidays to make the Festival of Lights bigger and brighter and to have more participation.

Barbara Gulissano, a local resident and family business owner of The Green Cup on Bridge Street as well as Sheri DeFlavio of 40 Bridge contacted other businesses in the immediate area to make Bridge Street the focus of town that year. Gulissano contacted Bauer about joining them in lighting up the downtown area, and Bauer along with her landlord and other local business owner, Bridget Lamell of Reign Vermont, hopped on board.

Bauer taught her neighbors, Bridget Lamell and her partner, Chris Pierson, how to assemble the stars and Bauer shared her vision to make stars of multiple sizes to put all around the Fuller House where she rented a space and surrounding area where Lamell’s business adjoins.

Gulissano, DeFlavio, Bauer and Lamell came up with an idea to split up portions of town and go ask local businesses to partake in the mass star making.

In November of 2014, Gulissano organized a meeting in the parking lot adjacent to these Bridge Street businesses and assemble stars with Bauer’s guidance. Valley residents from near and far drove down to drop off branches from their yards to be made into stars big and small. Sugarbush employees came down by the carload to make an abundance of smaller stars to hang throughout the village.

That year, The Valley was magical. Stars of all shapes and sizes popped up from the north to the south.  Lamell won the first prize in the Festival of Lights for the oversized stars that light up her cozy little nook and building. The Valley was aglow.

In 2015, the stars were a hit and growing in numbers across the state and everyone was hopping on board. Stars could be seen hanging on trees, on homes, on barns and in scenarios where creativity shone through.

In the coming years, stars grew in numbers and showed up here and there lighting up what seemed to be every corner of the state. In October of 2016 the stars took on a new meaning when five local teens were killed in a wrong-way crash on the highway.

The stars were lit within days of the accident. People were lighting five candles nightly, one for each of the teens. The star has five points, and there were five kids. People made five of the exact-sized stars and hung them up adorning their homes. People lit their Christmas stars up in October, in a symbol of community and togetherness while the community mourned.

In 2020 stars can be found being sold premade or in kits by the chamber, in garden shops, feed stores and specialty shops. They can be found being sold on Facebook by crafty locals, and they can be shared and admired by online groups titled “Light up Vermont” where members share their star creations, as a festive holiday decor or just as a symbol of beauty and togetherness.

Reprinted and excerpted courtesy of the Mad River Valley Chamber of Commerce and Corin Bauer.