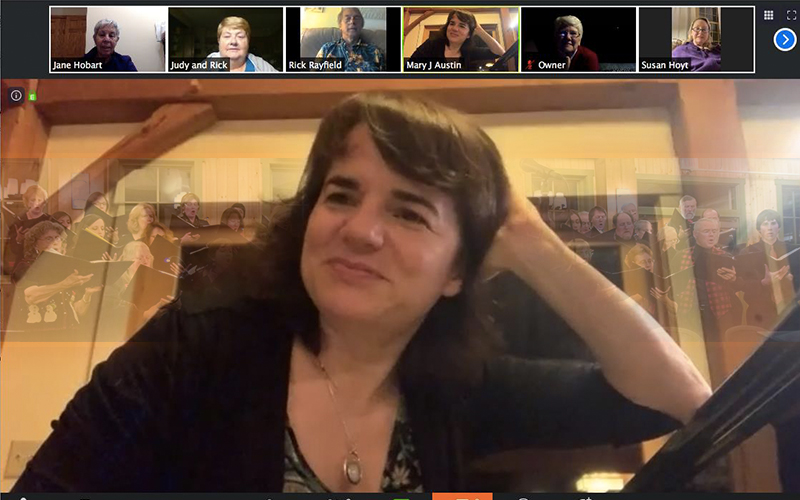 For 28 years, the Mad River Chorale has put on a holiday concert. The unfortunate arrival of COVID-19, however, left its members practicing alone in their separate homes. Still, as fall came closer, the chorale decided to face the formidable challenge of creating a virtual holiday concert.

Susan Hoyt, a board member, talked about the decision to put on a virtual concert.

“I thought, ‘Oh no! We will have our first year in 28 years that we will not rehearse and perform a holiday concert for our community,’ that was the first sentiment and terrible blow. The next thought was ‘Wait a minute, is there something we can do?’ and the next was ‘No way, we couldn’t put on a virtual concert ... could we?” she recalled.

After much deliberation among the board members, the plan for the Mad River Chorale’s first virtual concert was created.

Usually their holiday concert features about 60 singers, but this year there will be 29. This was because of the complicated process of recording each singer. Most of the pieces for this year's concert the chorale had done before. But they still had to learn them over again. What goes into a virtual concert? Hours and hours of recording, singing and the technological know-how that seemed daunting to many members.

There was a multitude of multitasking involved in recording the singers’ parts. They used their iPhones to record a video of themselves singing, on a laptop they watched a video of their conductor, glancing at their music, trying to look at the camera, all the while listening to their guide track through headphones.

Keep in mind that these singers are used to being shoulder to shoulder with their fellow members. Hoyt said on average it took her 30 takes for every song. “Well, you have to get it right. There were times where I got almost to the last phrase and I would mix up a word, or the cat would bang on the door, or someone would start a leaf blower in the yard,” she said. In a normal year, the singers would dress in tuxedos and dresses. This year was no exception. For every take and song, the singers dressed up from the waist up. “The first time I did it I had my fancy shoes on, my high heels, and I thought ‘what am I doing this for?” Hoyt said.

Mary Jane Austin has been a conductor with the Mad River Chorale for three years. She was also their pianist for years. Austin does not usually spend hours upon hours at a computer, but she found herself there putting all the recordings together. “It was a very steep learning curve for me,” she said. Austin has a new computer, but she said after getting all the recordings for the first song, the files were so big that she had to get an extra external hard drive just for the storage.

Austin had used iMovie for previous, smaller, ensembles. For this project she graduated to an Adobe software called Premiere Pro. She made videos of herself conducting the individual parts of all nine songs (alto, soprano, tenor, etc.). She also made separate videos of herself singing each part of the songs. The instrumentalists recorded their parts as well. All of these videos had to be synced and layered together to create the full songs.

The concert video will debut on December 21 at 7:30 p.m. Watch it at madriverchorale.net. It will be available through the end of January. There is no fee, but donations will be accepted.

The Mad River Chorale members plan to watch the concert when it debuts, something they never got to do before because they were always the ones performing.