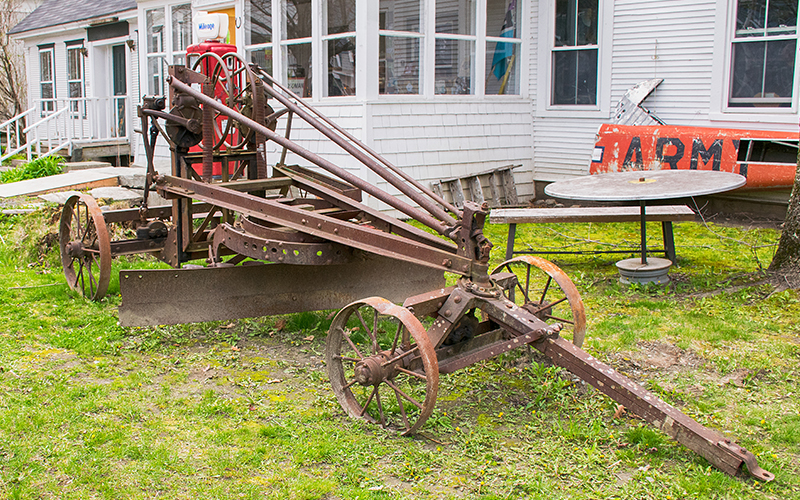 The front lawn of the Madsonian Museum on Bridge Street in Waitsfield is now home to a 19th-century snow roller/road grader. The Adams Tilt Wheel Grader was found in Moretown this winter and donated to the Madsonian this week.

Ron Bruce, 80, Moretown, said that Shane Cook found it while plowing this winter. He went to see the guy who owned the property where it was found and the owner didn’t want it. Bruce said he did and made plans to pull it home with his tractor once the snow disappeared. He did that last week.

He’d planned to sell it and thought he and Cook could make some money on the find, but they didn’t get many inquiries.

Enter Madsonian founder Dave Sellers who noticed it while driving to Montpelier over the weekend. He stopped on the way back to check it out.

“It seemed like a huge metal insect at least 100 years old.  Ron donated it to the museum and Hap’s brought it back to the museum the same day. Before motors and hydraulics these huge machines were pulled by horses or tractors with an operator on the back working the levers and wheels to manipulate the grading blade and tilt wheels that leveled the roads each spring and again when needed, which was after each rainstorm or flood or freak snowstorm. The illustrated instructions are engraved on a label so you can see how to operate it,” Sellers said.

This machine was operational during the apex of the dirt road era when the horses were replaced by cars but before pavement and before hydraulics and bigger machines were invented to operate heavy duty workloads.

“The grader designs evolved to include tilting the wheels for optimum efficiency. The operator would stand on the back and dial in the optimum blade angle depth, tilt of the four steel wheels and with hand signals communicate with the tractor driver in front. This must have been an exciting and dynamic experience. This machine in the front yard of the museum is there to be explored and climbed on as if you were grading the roads 100 years ago,” Seller said.

Sellers recalled seeing an enormous cylinder of wood almost 10 feet in diameter on the side of Senor Road in the 1960s. He said he asked Lester Senor what it was and learned that it was a snow roller which was used to roll the roads before auto travel and graders such as the one he received this week.

‘For sleigh and horseback, you need the snow to be packed down. No salt or sand and no noise. It must have been awesome,” Sellers said.

Seller said that after the advent of such graders, the first job in the spring after the snow runoff was to put fresh gravel on the roads.

“Most of the forest was cut for sheep meadows and there was nothing to hold the spring thaw from rushing to the Mad River. Then the road crew went onto the river downstream from the Warren covered bridge and upstream from the Waitsfield bridge to take the bank run-washed gravel up to the mud holes and make the roads passable,” he said.

“That material, bank run gravel is hard to find now and is illegal to dredge it out of the rivers, another discussion. The gravel banks would fill up the next spring for the road crews to harvest leaving deep swimming holes by the covered bridges,” Sellers continued.