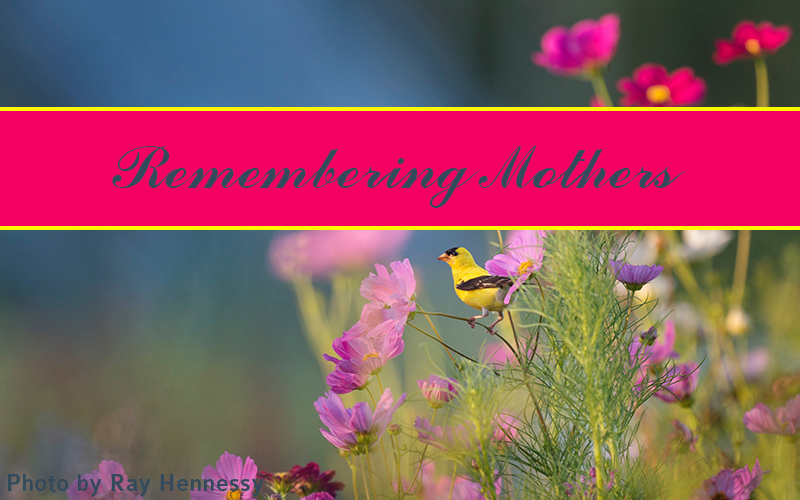 In recognition of Mother’s Day on May 9, The Valley Reporter reached out to some of the residents of Evergreen Place to learn more about their mothers and how they celebrated the day.

“She’s been gone for quite a while. I miss her greatly,” said Dave Trusas, 65. He’s lived at Evergreen Place for the past six to eight years he said.

His parents only knew each other for three weeks before they were married. His father was in the U.S. Air Force and one of his four brothers was born in Alaska. His dad was stationed there while it was still a territory.

“He always wore white uniforms and his rifle was covered in white and he’d be lying in the snow waiting for the Russians,” Trusas said. 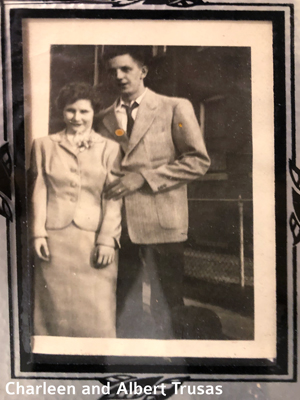 Trusas was born in Boston and lived in and around there for most of his life. As his parents got older, he ended up being the caretaker for both of them, living with them in the family home and taking them to their various medical appointments; his dad to the VA and his mother to her diabetes appointments and her dialysis.

“I’d make her lunch after dialysis. Her name was Charleen. She was a pretty lady, obviously, that’s why my father married her,” he said.

On Mother’s Day, he liked to take her out to lunch. She really liked to have a hamburger and a coffee milkshake, but was reluctant to do so because of her diabetes. Trusas first prevailed upon her to get a new diabetes doctor since he found the first one to be a quack and then he got the new doctor to tell her it was okay to indulge in her preferred lunch once in a while. So, in addition to Mother’s Day, he’d get her that lunch about once a month or so.

His father Albert died 11 to 12 years ago and was his best buddy. His mother died a year after his father.

“I miss them both,” he said, noting that he missed weekends on the boat with his dad and missed his mother’s cooking.

“Man, she could make a mean meatloaf and great meatballs. I asked her for the recipes and she said she didn’t have any. She just mixed things up and made them. She was good,” he added.

Sandra Fletcher’s mother was the matriarch of the family and also bossy, Fletcher said.

“She was extra special. She ruled everything. If you could have seen my mother, she resembled Queen Elizabeth to a T except her hair wasn’t as gray as the queen’s,” she said.

Her mother, Frances Bliss Brear, passed away in 2013 in her 80s. She had a form of dementia but never lost sight of who her three daughters were. She lost one daughter to cancer a few years before her death.

“There are two of us now. My sister Betty lives in Montpelier. She and I were born one year apart to the day,” Fletcher said. 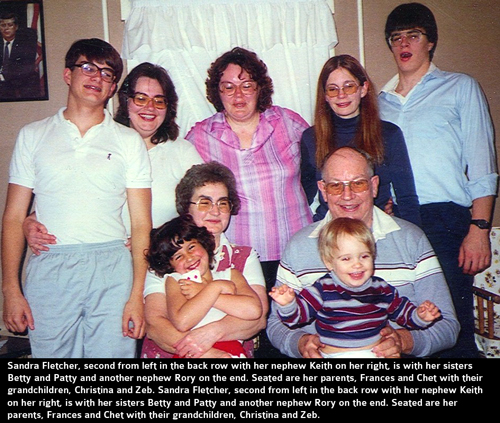 “And you never saw my parents apart. They were very close. They were always together. He just passed away a year ago in November, Fletcher said.

Fletcher grew up in Montpelier and got to know The Valley through her work as a proof operator for what was then the Howard Bank.

On Mother’s Day she and her sisters always got together for Sunday dinner, something they also did almost every Sunday. After church her mother always had something prepared for the family dinner.

“And now on Mother’s Day, it’s kind of hard because I don’t have a car and I’ve been sick and in the hospital myself. She’s buried at the veteran’s cemetery in Randolph with my father,” Fletcher said.

After they lost their mother and for as long as they could she and her sister got together at their mother’s grave with flowers, weather permitting.

“My sister and I are very close. If it wasn’t for the pandemic, we’d still be getting together after church on Sundays,” she added. 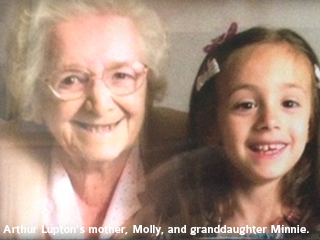 Arthur Lupton lost his mother five years ago when she was 94 years old.

“She was my best friend,” he said of his mother Molly who lived outside of London near Redding at the time of her death.

Lupton was in or around London for a great deal of his life. He ran a ski chalet in France and met an American whom he ended up marrying. After he moved to Vermont, he flew over now and again to visit her and called her often. He has an older brother who remained in England.

“She was a London girl. She met my dad Herbert when he was on reserve from the army. He was working as a butler for a lord in Kensington, London. He was a Yorkshire man. Mum was working in the sunlight laundry in Kensington, a company that took your washing and cleaned it,” Lupton said.

His mother was very much a stay-at-home mom. That’s what interested her and what she wanted to be, he said.

“She was short, slightly overweight with a chubby face. I have a wedding picture of her,” he said.

His mother was the disciplinarian in the family, even though she always threatened Arthur and his brother with what would happen when their father got home.

His father died about 10 years ago at the age of 91 and Lupton said he’s trying hard not to break that familial longevity streak.

Johnnye Eure’s mother, Pauline Walmsley Arnett, was a giver. As a child, Eure remembers spending weekends with her mother going from house to house, giving people food and clothes, and even helping them pay their bills. “She was very active in the community and in politics. She was very liberal for her day” said Eure.

At home, Eure’s mother was just as kind. “She was a gracious host,” said Eure.

She would egg people on to tell their stories rather than be the one to tell them. She had a good sense of humor.”

Eure grew up in Memphis, Tennessee, where her mother would host parties with prominent political figures. For instance, when Eure was 10 years old, she remembers sitting at the kiddy table in her house with Al Gore, whose father was senator at the time. 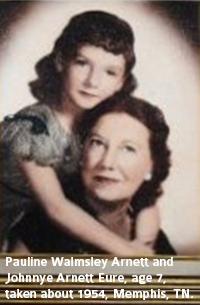 More than the parties, Eure loved the way her mother, a beautiful woman with rich auburn hair and watery blue eyes, treated everyone like someone special. “My mother would ask the guy who cut the grass to come have lunch too. She’d give the trash man cookies and lemonade,” said Eure. “I was taught that nobody’s better than anybody else.”

Unfortunately, Eure’s mother passed away when Eure was only 11 years old in 1969. “My mother died when I was 11, then I went to live with my grandmother, who died two years later.” At a young age, Eure had no one to care for her. “My dad got sick and couldn’t take care of me,” she said.

Still, Eure was able to persevere through the lessons she learned from her mother. “My mother taught me never to give up. And the best thing to do is less self and more others. If you’re having a really bad time, don’t wallow in it. Do for others. If you’re thinking about other people, you don’t have to think so much about yourself. The best medicine is doing for other people.”

In The Valley, Eure was one of the masterminds behind Free Wheelin’, a service that drives people to appointments and errands around town for free. “I had a car! I drove people everywhere!” said Eure. She also ran the food shelf for seven years.

“My mother instilled in me my love of giving to the community,” she said.