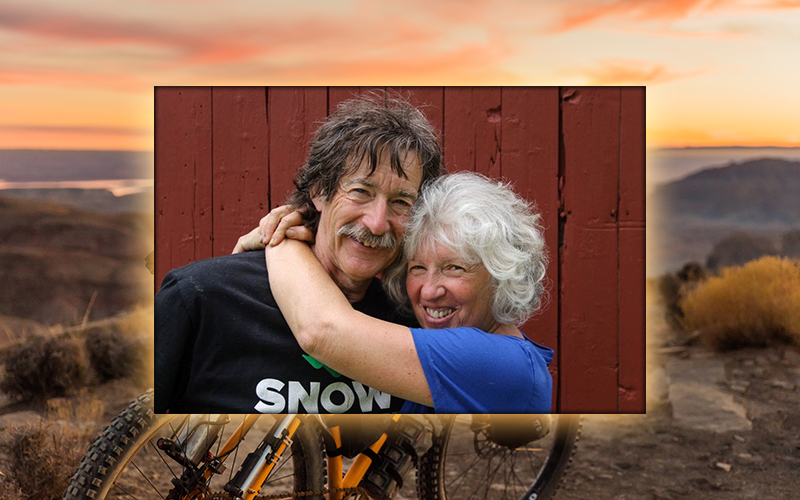 Next month Shevonne and Pat Travers, Waitsfield, will embark on a 3,800-mile bike ride from Seattle to Washington, DC, that was inspired in part by a journey her father took in 1939.

“My father did a bike trip across the country in 1939, going east to west. He did it on a one-speed, girl’s bicycle with a bedroll and can opener, sleeping in cemeteries. That’s another reason I’ve been craving doing this trip,” Shevonne said.

They will be roughly following the Great American Rail Trail which sparked their interest a while back and set them into planning mode to see if they could make it work logistically and physically. The rail trail is 51% complete which means they’ll be following a lot of it, but also detouring around on side roads and back roads to stay off major highways.

They’ll be driving to Washington, DC, on June 3 and catching a train to Chicago on June 4. From Chicago to Seattle they’ll have a roomette which will allow them a place to sleep and bathe during the three-day trip.

Unlike her father, they will be cycling on gravel grinder bikes with panniers and bike camping with hotel stops every four to five days.

“We bought a very small tent and we have miniature sleeping pads, bags. We’re not going to carry a stove. We’ll buy food along the way. We’re taking a couple of changes of clothing,” Shevonne explained.  Pat will carry four panniers and Shevonne will carry two.

They will be maintaining a website, a blog about their adventures to keep friends and family up to date. (They will be sharing updates with The Valley Reporter as well). They hope to be back by the end of August.

“We haven’t put together very many rest days for this trip. We’ll see how it goes. I’ve been looking at blogs for the rail trail in Washington and it’s far from what I expected. It’s not like the Lamoille trail. There are burned-out bridges and places where you have to take your bike through tumble weeds. There are railroad tunnels where there are rockfalls in the tunnels. It seems like the Washington section is better set up for horses,” Shevonne said.

“We’re shooting for 40 to 50 miles a day. There may be days when it’s shorter than that like the Rockies, but other days we’ll average more,” Pat said.

Their route will take them through Washington, including the Cascades and then Idaho, and to Montana until Missoula where they’ll leave the rail trail and skirt around Wyoming and Yellowstone National Park on Fourth of July weekend. They will pick up the trail again in Nebraska and follow it through Iowa. There are lots of gaps in Illinois as they continue east to Indiana, Ohio and Pennsylvania. They will be in West Virginia before heading up to Pittsburgh to the Washington, DC, section of the trail which runs through northern Maryland before entering DC.

This is the first time either of them has undertaken an adventure this big and ambitious, although Shevonne has twice cycled through Iowa with the Register's Annual Great Bicycle Ride Across Iowa, a seven-day party on wheels, she said.

They live on the East Warren Road and have been training with 10-mile loops that require them to climb 2.5 miles up to end their loop. They’re trying out their micro-camping gear this weekend at Little River State Park.

While they’ve taken shorter hiking, biking and camping trips before, they’ve never taken a 120-day trip where they’ll be together 24/7.

“Our friends and family are worried,” Shevonne joked.

They are excited to see states they’ve never visited and are looking forward to meeting people along the way and are hoping for some live concerts in the towns they visit.

Here is a link to the rail trail: https://www.railstotrails.org/greatamericanrailtrail/