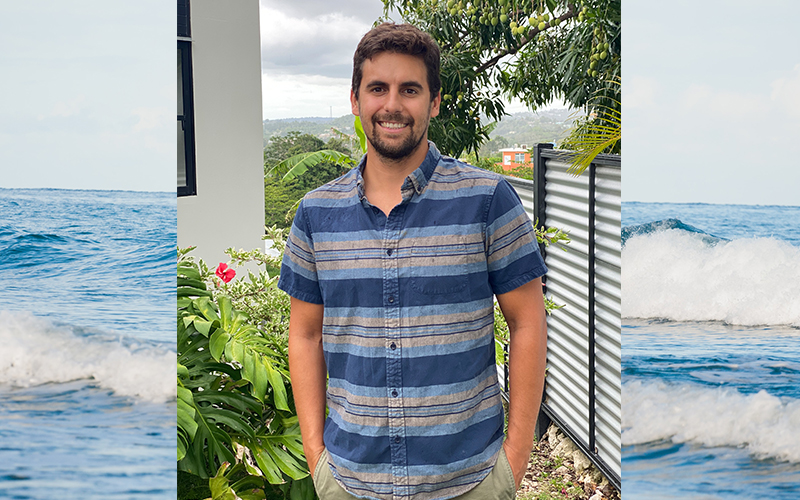 Tucked away in the small surf town of Rincón, Puerto Rico, a 2011 Harwood Union High School (HUHS) graduate is living his tropical dream life. “My life here pretty much consists of surfing, eating delicious local food and finding time to work in between!” said Nate Deflavio of Waitsfield. “My day normally starts in the ocean. If there's swell, I’ll go surfing. Otherwise, I'll try to go for a swim.”

“I feel very fortunate to be able to live here,” he continued. “Puerto Rico is a place that has an extremely vibrant culture, and I am constantly learning about the local people, their history, language and their deep love and respect for the island.”

However, Deflavio’s life on the island isn’t all play. Deflavio is the Caribbean business development manager for SOURCE Global, a company that creates clean drinking water using just sunlight and air. After Deflavio’s morning ocean fix, he opens his computer and gets right to work expanding SOURCE Global sustainability initiatives.

“I build relationships with governments, nonprofits, funding organizations and other potential partners in the region,” said Deflavio. “Every day I have conversations with people who are on the leading edge of sustainability and financing in the Caribbean and elsewhere.” SOURCE coined the SOURCE hydropanel, a technology that uses 100% solar power to convert air humidity into clean drinking water.

Here’s how it works: Solar energy is used to power fans that draw in ambient air and push it through a hygroscopic (water-absorbing) material that traps water vapor from the air. Then, using heat from the sun, the panel converts water vapor into purified, liquid water, where it pools in the bottom of the panel. Finally, the water is mineralized with magnesium and calcium for taste.

“In the Caribbean we have an abundance of both sunshine and air humidity, so the production is some of the highest we are seeing in the world,” said Deflavio, who has one panel on the roof of his house in Rincón which makes enough drinking water for him, his girlfriend and his dog.

Deflavio, who graduated from the University of Vermont Grossman School of Business in 2016, got involved with SOURCE in the fall of 2017, after Hurricane Maria devastated Puerto Rico. Deflavio had already been living on the island at the time. “I evacuated back to Vermont but I had friends and coworkers that were still on the island. They had no internet or cell service for months and I wanted to be able to help,” he said.

WANTED TO DO MORE

However, Deflavio wanted to do more than simply provide short-term disaster relief, like donating canned food and toiletries. “All of those things are very important for relief in the immediate aftermath of a natural disaster like Hurricane Maria, but I wanted to provide something that had a lasting impact,” said Deflavio.

A friend from college told Deflavio about SOURCE. Fascinated with the company’s new off-grid drinking water technology, Deflavio offered to partner with them on a hurricane relief fundraiser for Puerto Rico. “It turned out to be extremely successful,” said Deflavio. “I had a lot of support from people in The Valley and also from my family and friends across the country.”

After the fundraiser, Deflavio had his first stint working for SOURCE, as he traveled the island with company employees, installing hydropanels for those who’d lost fresh water access during the hurricane. “Two weeks after the hurricane I flew back down to the island to complete the first installation of SOURCE hydropanels,” said Deflavio. “At this time, the vast majority of the island still did not have any power or water. I also traveled across the devastated areas of the island finding additional locations where drinking water was needed most,” said Deflavio. “Soon after, SOURCE technicians and myself installed SOURCE hydropanels on three fire stations and several homes in the hardest hit areas of the island.”

To this day, all the people in the previously fresh-water deprived areas where Deflavio helped install panels still get their drinking water from those panels.

Deflavio’s fundraising and disaster relief efforts ended up landing him his current job. “After the fundraiser I was speaking to SOURCE and realized that every other island in the Caribbean needed this technology. I asked SOURCE if they would hire me so I could continue to bring this technology to the vulnerable communities. I have been working as the Caribbean business development manager ever since,” said Deflavio.

One benefit of the job is that it allows Deflavio to travel. “My work sends me to be the boots-on-the-ground outside of the Caribbean, if there are large opportunities to provide drinking water to the people who need it most,” he said.

Most recently, Deflavio lived and traveled through the Navajo Nation for several months for work. “We are now going to be providing SOURCE to hundreds of homes throughout the reservation,” said Deflavio.

However, the job has also made Deflavio excruciatingly aware of world’s fresh drinking water problem. “Drinking water access is already in a pretty dire situation,” said Deflavio. “Close to one-third of the world’s population does not have access to safe drinking water. This is only going to become worse with climate change.”

While SOURCE hydropanels are a new technology, Deflavio believes the SOURCE hydropanel will become the cheapest water source on earth. “Soon enough I do believe everyone will be using SOURCE, as opposed to other water supplies, just like people are now starting to use solar over traditional energy providers,” said Deflavio.

Moreover, the technology reduces the need for plastic bottled water, which is how many Puerto Ricans access fresh water to this day. “Drinking water access in the Caribbean is very fragile,” said Deflavio, who noted that natural disasters contribute to water insecurity. “We have increasingly intense natural disasters that include droughts, hurricanes, tsunamis, earthquakes and most recently, a volcano eruption in St. Vincent and the Grenadines.” All these events can threaten resource access to island dwellers, including access to fresh water.

On top of providing a more secure source of drinking water, SOURCE technology is able to reduce the need for single-use plastics. “Eliminating single-use plastics should be a mission that is important to everyone, I am just lucky enough to have it be my career,” said Deflavio. “I spend a lot of time in nature, and plastics have extremely disturbing impacts on our oceans and even our health.”

Single-use bottled water is a significant contributor to the world’s pollution problem, Deflavio noted. “Something not everyone knows is that there are micro plastics in almost every major bottled water brand,” said Deflavio. “We currently don't know the lasting impacts of plastic on our bodies, but I can't imagine it will be good. But we are seeing the impacts plastics are having on our oceans is devastating to watch.”

Deflavio grew up biking distance from the Waitsfield covered bridge, and a short drive away from Sugarbush. “It was a pretty ideal location to grow up,” said Deflavio.

Despite the clear difference between palm trees and evergreens, Deflavio has noticed similarities between Rincón, Puerto Rico, and the Mad River Valley. “For us newcomers to Puerto Rico, living here is similar to The Valley in a sense that it's a place where people normally vacation but a lucky few have been able to figure out a way to live here full time,” said Deflavio.

In The Valley, Deflavio grew up ski racing and attended two different ski racing schools: Green Mountain Valley School and Mount Mansfield Winter Academy, eventually ending up at Harwood, where he graduated. “Skiing was my life,” said Deflavio. “But my group of friends and I were always the first to skip out on training and even the occasional race when there was a powder day. All the time we spent exploring the mountains really taught me to respect and appreciate the outdoors, and that has now carried over into my passion for surfing.”

In addition to building a nature-immersed life, Deflavio has other important priorities. “My priorities in life are to have a positive impact on people, whether it’s through my work or through just everyday life and eat delicious food and surround myself with people I love,” said Deflavio.

“In regards to my plans for the future, I have to say I have never been good at planning ahead,” said Deflavio. “It doesn't matter if it’s one year, one month or even one week. I just turned 28, and I am going to try to enjoy every moment as much as I possibly can.”