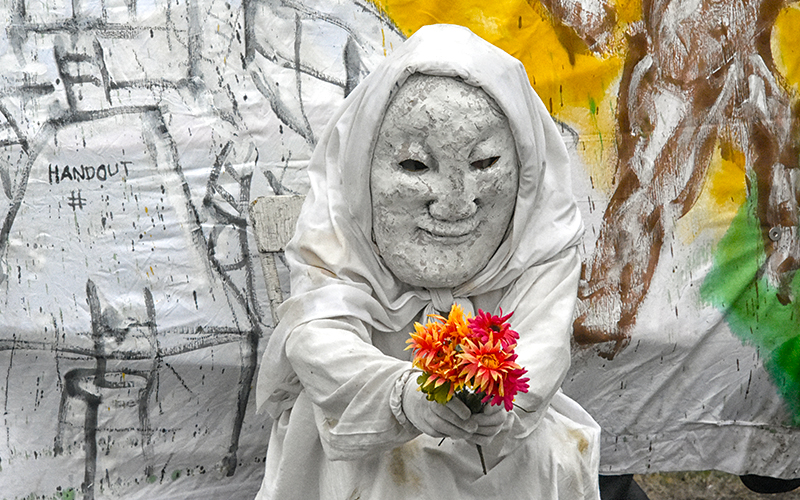 The Glover-based theater troupe’s show is a culmination of and transformation of a series of short shows presented during the COVID-19 pandemic. In 2020, while Bread & Puppet company members were making final preparations for a nationwide spring tour that the pandemic would soon force them to cancel, Bread & Puppet director Peter Schumann was working on a new series of paintings driven by imagery of human hands and texts exploring the concepts of light and darkness. Schumann painted these new pictures with discount latex house paints on discarded hotel bedsheets donated by a friend.

After Bread & Puppet's spring national tour was canceled, and as prohibitions on theater performances remained in effect in Vermont, the company turned its attention to creating short shows based on Schumann's recent paintings, Schumann's texts on light and darkness, and the daily news -- performing these short shows as cheer-up performances in the driveways of friends and neighbors and for unsuspecting shoppers in the parking lots of local big box stores.

The May 22 performance of “Declaration of Light” is a “celebration of protest and resilience in the face of intolerable circumstances and a passionate call for ‘underneath light...that...derives its power from its necessity, applying its divine strength where it is most needed,’” explained troupe spokesperson Joshua Krugman.

Bread & Puppet’s themes about social justice are a good match for the philosophy of Russ Bennett, Alan Newman and Mike Pelchar, the three owners of Planetary Matters which owns Camp Meade and several other nearby properties.

‘Their work always touches on the broader societal and topical currents in our society. Their work is always relevant and offers an excellent perspective on where we are and where we might go,” Bennett explained.

He said he and his partners are striving to build community at Camp Meade, to provide a privately-owned public space for gathering, for theater, for music, for food and for fellowship and more.

“Our core values align,” Bennett said on Bread & Puppet. “We’re about strengthening community and supporting businesses that are creating products in ways that respect the planet and each other. We’re about treating people with respect and paying them a livable wage and that matches up with Bread & Puppet.”

But beyond the shared values, Bread and Puppet offers spectacular theater and pageantry.

“They’re a world-class theater company and have toured the globe for decades. Not everyone can trek to their headquarters in Glover and so we’ll bring them to central Vermont and pay them to support the arts,” Bennett added

In addition to the 4:30 p.m. performance, the day will feature a Cheap Art sale from 3 p.m. through and after the show. Cheap Art, for those not in the know, is a tenet of the Bread & Puppet vibe. The Cheap Art manifesto on the theater troupe’s website spells out the why of selling inexpensive pieces of art.

“People have been thinking too long that art is a privilege of the museums and the rich. Art is not business. It does not belong to banks and fancy investors. Art is food. You can’t eat it but it feeds you. Art has to be cheap and available to everybody,” the manifesto reads in part.

“We’ll have the Cheap Art sale and food and drink and there will be an exhibition of Peter Schumann’s new tapestries about the “Declaration of Light” painted on sheets,” Bennett said.

Bennett is no stranger to Bread and Puppet, having toured with them in Caracas, Venezuela, as well as countless places in the country from the 1970s onward. He first encountered them when the troupe was in residence at Goddard College and found their work profound. When they moved to Glover, he began volunteering and helping to build sets and puppets and performing with the oversize puppets.

“It was pretty fun to take the big puppets and dance them around. But that thought process behind their work is so deep. It’s hard not to find it compelling. And so many interesting people have been involved over the years,” he said.

The Camp Meade performance will be limited to 300 people and masks will be required. There will be ovals on the green with four chairs in each oval and 6 feet of distance between the ovals.

Tickets can be purchased on the website at www.campmeadetoday or via Camp Meade’s Facebook page. Check out the website for more events coming this summer as well, including the Harwood Union musical, “The Fantasticks,” this weekend, Bee Ballet on Memorial Day, Salvation Farms farm-aid, a veterans’ town hall and more.