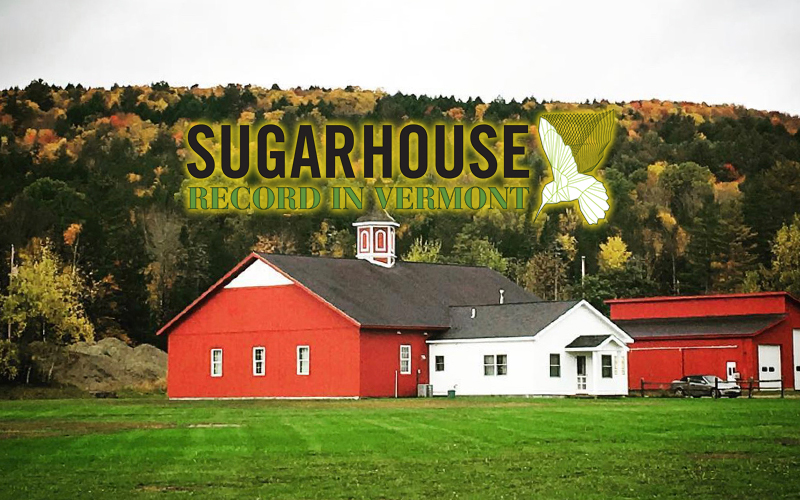 A secret musical sanctuary lies in the big red barn-like building at the end of the Mad River Park in Waitsfield. Musicians come from far and wide just to have a chance to record and perform at SugarHouse Soundworks, a studio with a beautiful mountainous exterior, inspiring high-tech interior and production-savvy executors.

“We’re really busy here,” said Sugarhouse Soundworks co-founder Eric Sigsbey. “If you’ve never been here, you might now understand why we’ve become so successful over the past few years.”

Sugarhouse Soundworks has worked with musicians such as Cabinet, Twiddle, The Wesli Band, Laura Love, The Grift, Soule Monde, Walk that Walk and Guy and Jeska Forsyth for starters.

While a typical day in the life at the studio involves recording with artists from 10 in the morning to 6 at night, some artists have been known to start recording in the evening, and work until 4 or 5 in the morning. “We put blow-up mattresses in the control room. We have a bathroom with a shower, a washer-dryer2 and a commercial kitchen,” said Stauss.

Finally, musicians simply enjoy the recording atmosphere. “Once a musician comes and records, they tend to come back,” said Sigsbey.

“It’s really the vibe,” added Stauss. “It has a great vibe. It’s very comfortable. We try to create an atmosphere that enhances creativity.”

The studio has been up and running since December 9, 2016. Sigsbey and Stauss bought the property together after meeting in Vermont. Both came to Vermont for a similar reason: They wanted happier lives.

In 1989, Stauss and his wife moved from New York to a small farm in Granville, where they raised two boys while taking care of a small herd of cows and a flock of chickens. “We wanted a simpler life,” said Stauss. In New York, Stauss had been professionally designing, recording and mixing sound in the entertainment industry for nearly 40 years. His experience spans music, radio, television and film in both live and post production. His film and television clients include CBS, Comedy Central, HBO, Sesame Street Workshop, RikMill Productions and Inner City Productions.

Sigsbey moved to Vermont in 2012 with his then wife after leaving behind his career as a corporate attorney in Austin, Texas. “I was working for companies that were getting bought out,” said Sigsbey. “It’s a lot of work. It’s lucrative, but after 10 years, I was bought and sold five times and I was burned out. We started looking for a place with clean water, good food and fresh air.”

Both Stauss and Sigsbey are happy with their decision to move to Vermont. “We’re living the dream up here!” said Sigsbey. Moreover, they are happy to have met like-minded music lovers in such a rural landscape.

“I’ve always loved recording,” said Stauss. “I love technology. But I also love the people. I find it very exciting, energizing and rewarding to work with musicians. I love to watch the band create something really special. It’s a wonderful experience all around.”

“I just love music,” said Sigsbey, who played the drums and harmonica in various bands growing up. “Then I got into recording.”

Sigsbey built his first recording studio in his barn in Dripping Springs, Texas, in 2003, which lead to him opening his second, full-service studio, near downtown Austin in 2010. The studio offered recording, mixing and video services.

However, Sigsbey claims that Stauss is the real recording hero. “Roger is very good at the technical aspect of it. He has the ability to interject positive helpful comments and suggestions without interfering with the process. He’s got so much experience and talent. He’ll work through the night with them (musicians). He’s so patient. I’m very fortunate to have him as a business partner.”

Now, the duo is looking forward to a busy summer full of live music. They’ve already sold out a concert for Vermont band The Grift in June, and there are a few tickets left for their live show featuring Soule Monde, Marc LeGrand and Some Hollow on Saturday, May 29.

Right now, the outdoor venues are limited to 250 people because of coronavirus. “We want to be safe. We’re doing a slow ramp up,” he said. However, there will be many more live shows to come. “If I survive these, I plan to do some more this summer.”