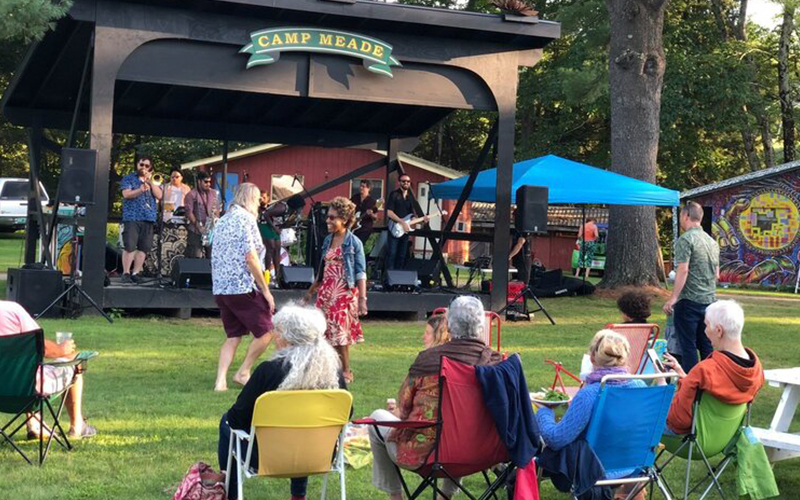 Brett Hughes will be live at Camp Meade this week on June 16 with a summerlong residency featuring some of the best players in the state.

Hughes et al will take the stage from 6 to 8 p.m. this week. For the summer residency program there will be a core group of musicians, and there will be guests and substitutions over the course of the summer.

“In addition to the regulars, I’m inviting people to sit in for three to five songs with the band backing them up. That means we have to learn new tunes every week, which is great. I also love that whole, varied and extraordinary musical community in Vermont that I want to invite people to join us,” Hughes said.

Hughes said he was looking forward to being able to ply his craft again.

“Getting together and playing again has really been a joy. We missed it so much. Playing together has reinvigorated a lot of my feelings about music. It’s so profoundly important. It’s most of my community and they’re the people I probably spend the most – or at least the best – time with. It’s also our work, our craft and for lack of a better word, our art. It’s all joy,” he said.

Unlike others, Hughes couldn’t embrace musical performances via Zoom.

“I couldn’t bring myself to do it. It didn’t make me feel connected. It made me terribly sad the few times I tried it. It didn’t have the same feel as making music into a space. Music happens in a space or a room or out in the air and as much as I appreciated being able to hear other people, it felt detached in a way that compounded my grief,” he explained.

But, he said, he appreciated the solitude and introspection that the pandemic provided and predicted that amazing and creative things will come out of this time.

Hughes is a native of Kansas who came to Vermont when he was 10 years old. He worked in magazines in New York for eight years before returning to Vermont and a big part of why he came back was music.

“I missed my musical tribe and I missed playing music,” he said.

He started his musical career at 21 in a New Wave band but bluegrass cast a siren song for him that he could not resist.

Beyond the free musical performances, during the Wednesday performances, Camp Meade will be serving up libations and refreshments from its Big Time BBQ featuring offerings from creemees to BBQ, vegetarian and vegan, hot dogs, PBJs, watermelon and more.