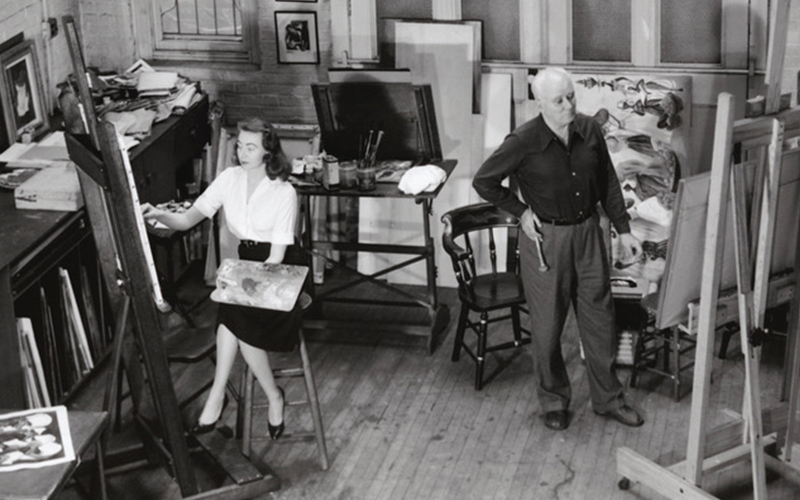 Tucked away off a winding dirt road in Waitsfield lies the Bundy Modern – a striking example of modern architecture that contrasts the natural forested surroundings of the Mad River Valley. This is not to say it does not fit in – quite the opposite, in fact. It is precisely this uniqueness that brings out the beauty in the building and the landscape that it rests on.

Owned by Wendell and June Anderson and designed by late philanthropist Harlow Carpenter, the Bundy Modern was built in 1962. In addition to an art gallery, it has also served as a concert hall and primary school over the course of its almost 60-year history. The Bundy is now preparing for its opening reception on June 25 with the work of American artists Adolf and Virginia Dehn (1895-1968, and 1922-2005, respectively).

While both were prolific in their time and in their own respective fashion, the pair’s creative work had little in common.

“There are really only two things that connect the work of Adolf and Virginia Dehn,” said gallery owner Wendell Anderson. “They were married, and they worked together.” Outside of this, there is little to suggest their collaboration. The exhibit, titled “Landscapes and Inscapes,” alludes to their stylistic differences.

This is quite evident when one enters the gallery and is first met with the plain-spoken realism of Adolf Dehn’s picturesque landscapes. Each of his works is like a snapshot in history, with every detail intended to draw out the essence of a particular place and time. There is a very literal and honest interpretation of the external world on display with Adolf’s pieces.

But just around the corner sits the artwork of Virginia Dehn – deeply abstract and standing in stark contrast with her husband’s. She took a more introspective approach, choosing to represent things in large formats with bright, flowing shapes and colors. Unlike Adolf’s work, the art reveals little of its original inspiration – but at the same time, evokes feelings that are difficult to place.

In many ways, displaying the work of Adolf and Virginia Dehn is deeply fitting for the Bundy Modern. Much like the artists themselves, the building and its surrounding environment stand in contrast – yet this only highlights the aesthetic of each. Despite its modern design, something about the Bundy accentuates the beauty of the Mad River Valley and still seems right at home here.

While Anderson noted art galleries and museums are common in areas like Stowe, the Bundy Modern wants to maintain its own identity and stay in tune with the culture of the Mad River Valley. At the same time, encouraging more people to visit remains a top priority. While he noted this would be a challenge going forward, especially in the wake of the pandemic, he was optimistic towards the future.

In addition to the reception this Friday, June 25, from 5 to 7 p.m. the Dehn exhibit will be open to the public by appointment via the Bundy Modern’s website (bundymodern.com) from now until October 10.